Gather ’round kids and I’ll delight you with stories from my past. Today’s theme: birds. To you, they’re cute feathered friends; something to feed outside your window and identify in a nature book. To me, they’re winged demons, intent on my harm.

It all began at the tender young age of two. My family was enjoying a pleasant outing at the beach. And then someone decided to feed the seagulls. Even at such a young age I knew this was not a good idea for me, but my well-meaning dad decided to help me overcome my fear. He put a piece of bread in my fingers, took my small hand in his large one, and lifted it high into the air (or as high as a two year old can reach). From far above, an eagle-eyed seagull spotted the treat and descended quickly upon us. Unfortunately it mistook my tiny fingers for the bread and tried to nibble them instead. And that’s how it all began.

Fast forward nine years. My sixth grade science class was wrapping up a unit on the rain forest and our teacher had somehow procured an array of rain forest animals to make an appearance in our classroom. I seem to have blocked out some of the details (if any of my sixth grade classmates are reading this and remember things better than I, please enlighten me!), but for some reason several of us were chosen to bring the animals into the room at specified times. Guess what I got to hold? And guess what bit me? Birds: 2 Lauren: 0

Seventh grade. I was on the Decorating Committee for the Eighth Grade Celebration Dance (I’m not making either of those names up). A teacher, a friend, and I went to the local florist shop to buy balloons. The owner’s pet parrot was loose in the shop. I have several issues with the sentence I just wrote (namely, ‘pet parrot’ and ‘loose in the shop’), but I’ll skip over them and get back to the story. Everything was going just fine. We had a growing stockpile of helium-filled balloons and the parrot was quietly minding its own business. That is until the balloon that was being filled made a loud squeaking noise. The parrot freaked out and started flapping around. AND GUESS WHO IT DECIDED TO LAND ON?!

Several uneventful years passed. There may have been a pooping incident or two, but nothing overly traumatic. Sadly, my good luck couldn’t last forever. The birds have it out for me and they were just biding their time. Their next chance came my junior year of high school.

I was given the amazing opportunity to travel to Spain with a group of classmates during April vacation. We flew into Madrid and spent the first day sightseeing around the city. No European vacation is complete without a trip to a pigeon-filled plaza and this trip was no different. We loafed around Plaza Mayor, snapping pictures, getting caricatures done by local artists, and practicing Spanish phrases, such as “Donde esta el bano?” (I’d put the upside down question mark and the squiggly line over the n, but I don’t know how to do that on this computer. Or any computer for that matter). Much of my time in the plaza was spent trying to avoid the aforementioned pigeons. I was not entirely successful as one of them managed to get a direct hit into the hood of my jacket.

Now if that was where my story ended, it wouldn’t be much of a story. But that was only the beginning of this tale. That night my roommates decided to go to a flamenco show. I was tired from not having slept on the plane ride the night before, so I decided to skip the show, wash my jacket (since it was the only one I had with me), and go to bed early.

Once the poop was gone, I had the brilliant idea to use a blow dryer to get the hood to dry faster. I plugged in the adapter, turned on the blow dryer, and was suddenly plunged into darkness. Blown fuse. Okay, I could handle this. I went to the door, turned the handle, and had a horrible realization. I was locked in.

The hotel we were staying at was very old and required a key to unlock the door from both the outside and the inside. Since we had only one key and I would be asleep by the time my roommates got back, I had given them the key, content to be safely in the room for the night. Content, that is, until I was locked in the pitch black, all alone, on my first night in a foreign country.

I started to freak out a little bit, but kept my head as best I could. I went to the balcony and opened the curtains so the lights from the city could shine in. Then I went to the phone and called the front desk. “I blew a fuse and I’m locked in my room.” The man at the front desk didn’t speak much English, but he did manage to understand the ‘locked in my room’ part enough to start snickering at the crying American teenager on the other end of the line. You’re welcome, mean Spaniard, for the laugh. A few minutes later he was at the door, freeing me from my prison. I managed to get out, “No luces!!” Understanding dawned on his face and he went to a box on the wall in the hallway, flipped a switch, and hallelujah, las luces!!

Now in case you’ve forgotten in the midst of my rambling, this entire traumatic experience was the direct result of that stupid pigeon in Plaza Mayor. No pigeon, no poop. No poop, no blow dryer. No blow dryer, no blown fuse… you get the idea.

It’s been many years now, but I know that eventually the birds will strike again. Last year I decided I could no longer stand idly by while they planned their next move. My husband likes to hunt and he invited me along on a bird hunting trip. Spending time with my hubby and showing the birds I’m not afraid anymore? A perfect combination! 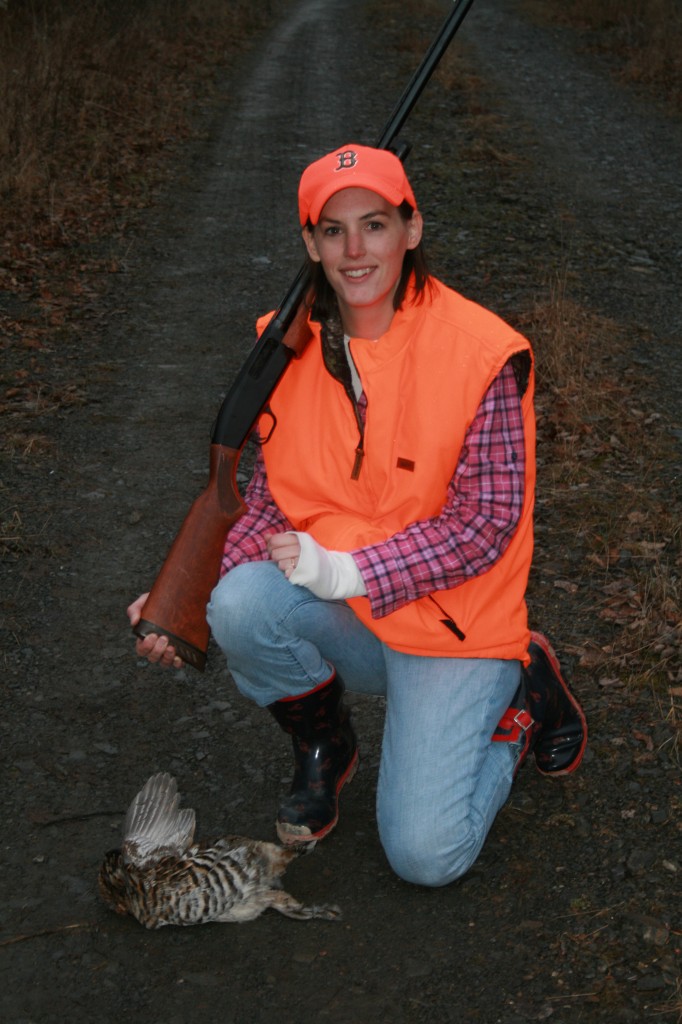