It was a dark and stormy night.

Just kidding. It was a gorgeous, sunny day in early October.

My husband, not usually known for being into holiday prep, had Halloween on his mind.

“Hey guys,” he said out of nowhere, “Halloween is less than a month away. You need to start thinking about your costumes because we’re not leaving it ’til the last minute this year.” 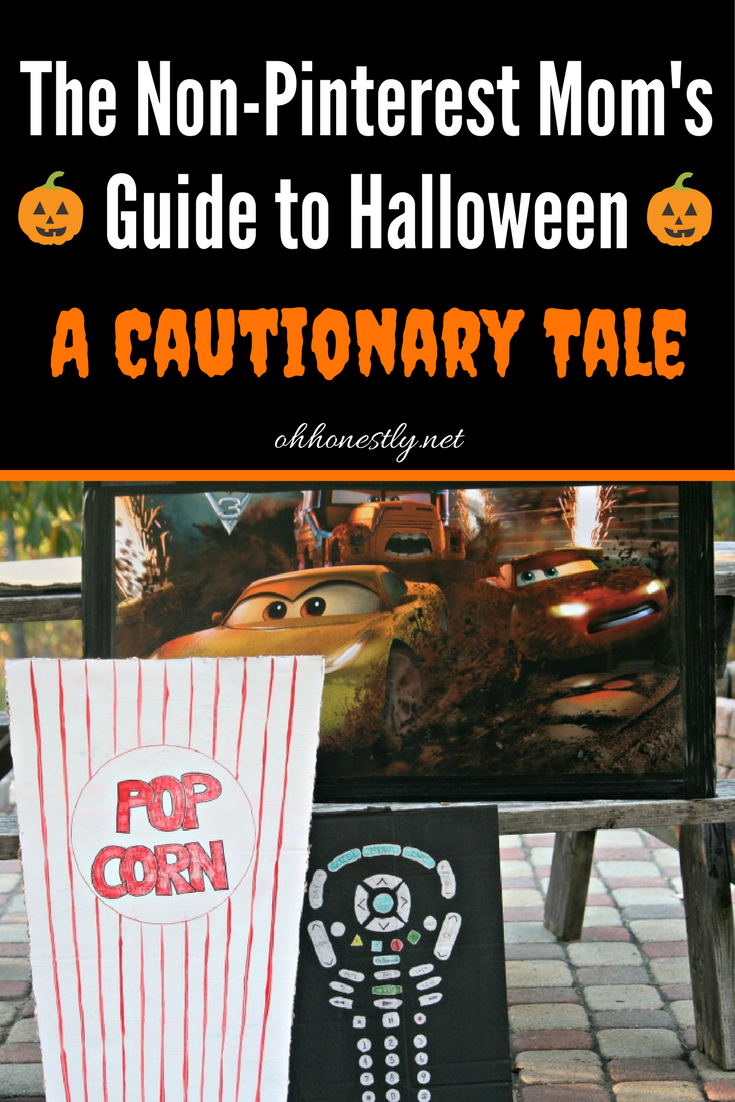 The Non-Pinterest Mom’s Guide to Halloween: A Cautionary Tale

Halloween has never been my favorite holiday, but over the past few years it’s become a tradition to have my parents and my sister’s family over for dinner to celebrate my mom’s birthday. Then, after dinner, we all go trick or treating in our neighborhood.

In years’ past, the kids have grabbed costumes out of our dress-up bin, but this year the boys have outgrown most of the ones we own and my husband wisely recognized the fact that if we didn’t make a plan, we’d be scrambling to put something (or three somethings) together on October 31th.

While I’m usually all about simplicity with these types of things (hence the dress-up bin costumes), for some reason I piped up, “You guys should do family costumes! Like, have a theme!”

I should have realized my mistake immediately, but I remained unaware as, miraculously, all three of the kids jumped on board.

In mere seconds, we had a theme:

Fridays are always Family Movie Night at our house, and the fact that the kids wanted to wear costumes that reflected something meaningful to our family warmed my heart.

That was the point of no return.

Eli would be the TV, Samuel would be the box of popcorn, and Annelise would be the remote. I immediately made a mental list of the items I would need, still unaware of the perilous situation I’d put myself in.

Here’s the thing: When you aren’t a Pinterest mom, but have had moderate success with various Pinterest projects, you tend to forget about your failures and instead gain a false sense of confidence in your own crafting abilities.

“Hey,” you tell yourself, “remember that amazing sign you just made from an old pallet? You rocked that. You can totally make three Halloween costumes for your kids. In fact, you don’t even need Pinterest to do it. Let’s go rogue!”

What you forget to tell yourself is, “Hey, slow your roll. Remember when you tried to make that pineapple Christmas tree? You sucked at that. This might be harder than you think.”

So off to the store I went to buy supplies, already basking in the glow of how cute my kids would look and how I’d take step-by-step pictures to create a “how to” blog post.

“That’s right,” delusional me said, “Next year, non-Pinterest moms will be turning to ME for costume advice. I’ll show those Pinterest moms that anyone can do this!”

I bought tape, cotton balls, ribbon, and paint. The only thing I still needed was cardboard.

Thankfully my new memory foam hybrid mattress from Tomorrow Sleep arrived at just the right time. I never knew mattresses could come in a box, but that’s exactly what this one did. It was pretty fun to take it out and watch it puff up and once we had it set up, I had plenty of cardboard for all three costumes. 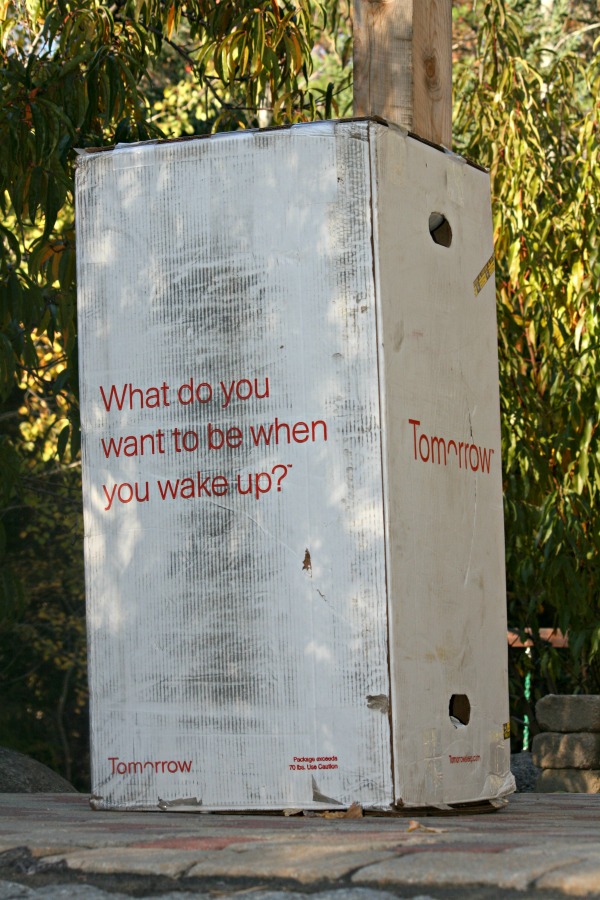 Side note: If you’re on the hunt for a new mattress, check out my review. I get into more detail there, but to give you a hint, we’re loving it. I thought I wouldn’t like the memory foam because I hate those bed toppers, but it’s super comfortable, and my husband, who hasn’t slept well in years, is finally getting some rest.

I CAN'T WAIT TO GO TO BED TONIGHT!!!For 11 long years, we've needed a new mattress and tonight is finally the night!This fall I've partnered with Tomorrow Sleep to try out their memory foam hybrid mattress. I'll be sharing my thoughts (and a discount code!) in the next couple of weeks, but for now I'll just share this fun video. Doesn't it look cozy??

The costume creation started out well. I even had my five-year-old help while the boys were out one afternoon with my husband. 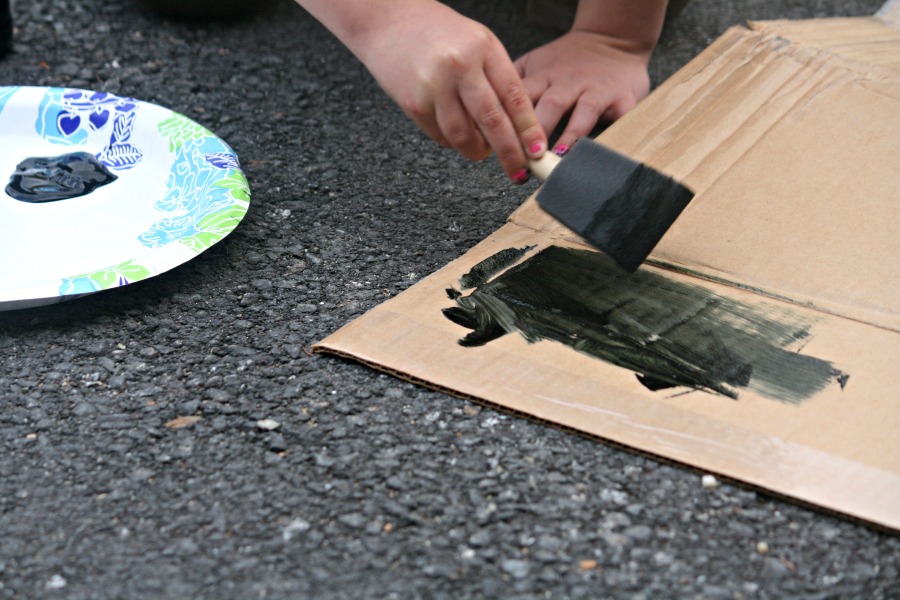 When the boys came home, things started to sour.

“Well, it’s too late,” I told him, “We decided on this theme and I’ve already started making the costumes. You’re gonna be a TV.”

From that point on, the opposition intensified. Every time he saw me working on the costumes, he reiterated his displeasure. Soon Samuel joined in, though not as insistently, since his costume was looking pretty good. The more they complained, the more I dug in my heels.

I continued to work on the costumes, but without the excitement from the kids, it became more of a chore than a fun project. Plus, it was taking a lot more time than I expected it to. My “making Halloween costumes can be fun and simple and fast” blog post idea seemed less realistic with every passing day.

Finally, I caved. The costumes were almost complete, but I was sick of arguing.

“Listen up guys,” I told the kids, “You don’t have to wear the costumes trick or treating, but you do have to put them on so I can get pictures.”

It was the least they could do, I figured. I couldn’t just trash the things after spending so much time on them.

So I put the finishing touches on the costumes. I forced the kids to put them on. And then I yelled at them for 10 or 15 minutes while I tried to get at least one decent shot. 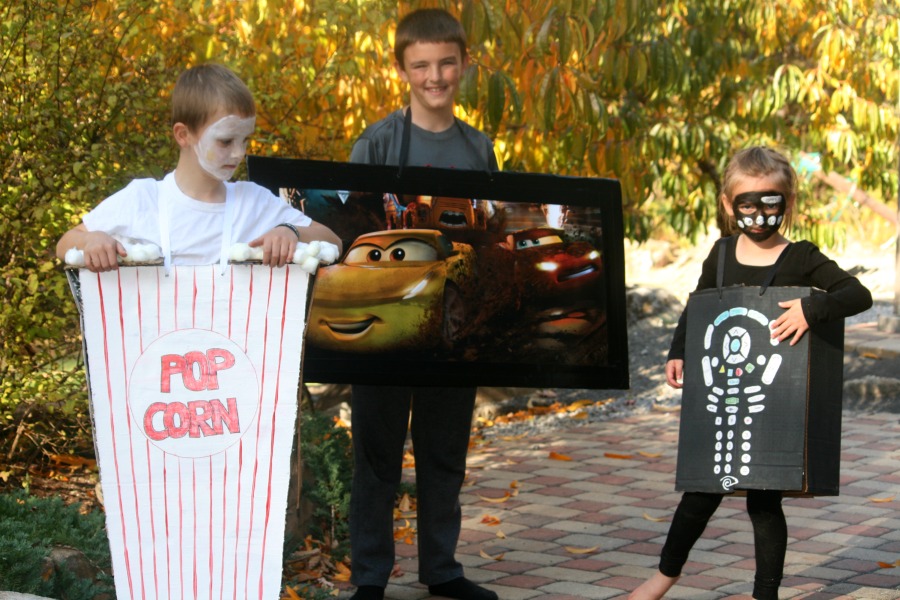 I did not get one decent shot. I did get a lot of “this is as good as it’s gonna get” shots though.

I don’t know why taking pictures of my kids is always so stressful, but this time around I do. Eli was being less than cooperative, Samuel’s costume was falling apart, and Annelise kept disappearing and having to be corralled back to where we were. 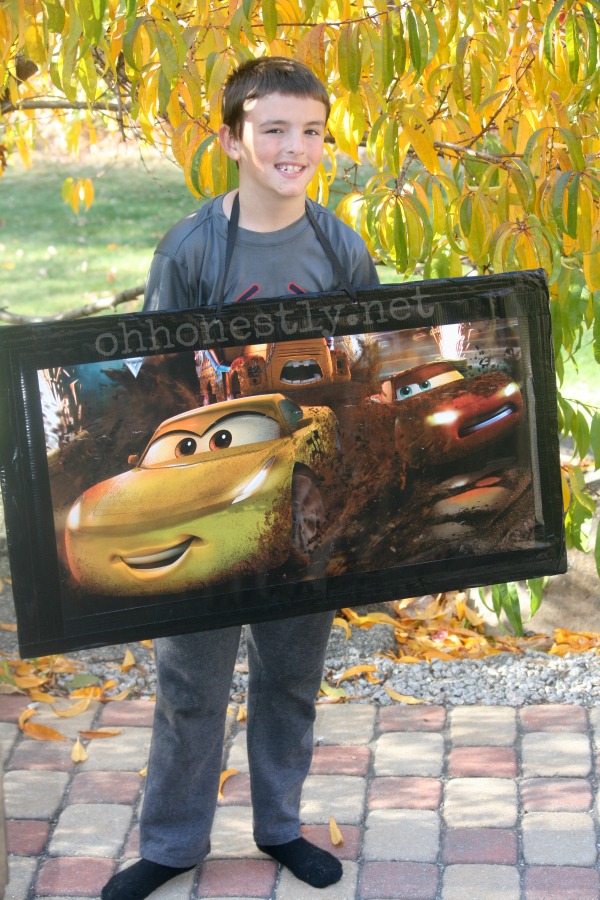 The forced smile that says, “Let’s get this over with so I can go back to playing basketball.” 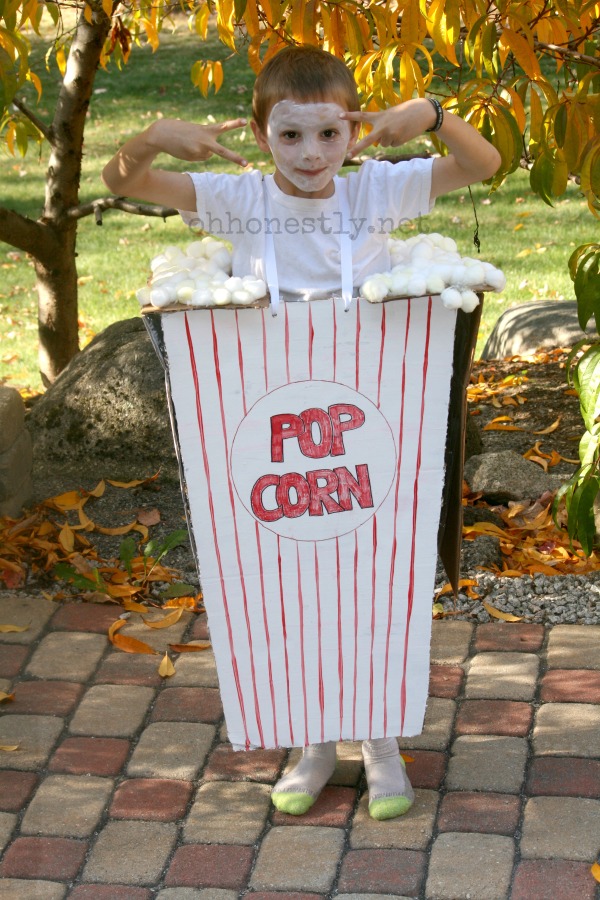 Notice how it’s coming apart at the seams? Also notice how he can’t put his arms down? I swear in my mind this costume worked perfectly. 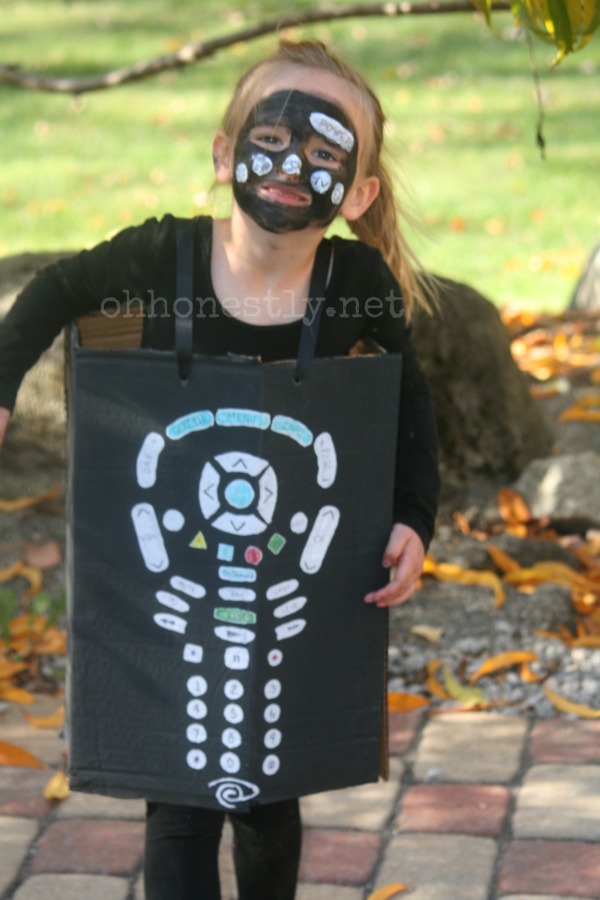 At least one kid was excited about her costume. Too bad a remote all by itself is kind of weird.

In short, our photo session stunk and all of us were grumpy by the time it was over. Especially me.

So what is the moral of this cautionary tale?

If you, like me, are not a Pinterest mom, heed my warning: Unless your homemade costume consists of throwing a sheet over your kid and cutting out a couple of eye holes, don’t do it!

It will take far longer than you think.
It will be harder than you think to get it to look good.
And most importantly, your kid will probably change his mind as soon as you’re too far into it to turn back. (Seriously, my kids always have three or four costume changes before Halloween; I don’t know why I thought this year would be different.)

I don’t know what my kids will be for Halloween this year. We’ve already told them that we’re not buying them anything.

So if a kid shows up at your doorstep in a costume that looks two or three sizes too small, it’s probably one of my boys, wearing something he pulled out of the dress-up bin five minutes before it was time to trick or treat.