Good news! This week I wasn’t quite as much of a hag as last week!! There was still yelling, of course; there probably always will be. But I either made a concerted effort to tone it down or the kids were better behaved (or a combination of the two perhaps). Apparently though, my efforts were lost on at least one of the kids. Observe:

Thursday, January 30: Samuel knocked a picture off the wall and the frame separated at the corner a bit. Trying not to let it be a big deal because it’s not in the big picture, but I’m still annoyed. I didn’t yell so that’s an improvement. Two minutes later: Well, apparently not much of an improvement. He came downstairs and said I ‘hurted’ his feelings because I screamed at him. (I absolutely did NOT). I guess I can’t win.

My kids either perceive a stern voice as a yelling voice, or they’ve figured out how guilty I feel when I yell at them and have decided to use it to their advantage. If it’s the former, there’s really nothing I can do about it since they need a stern voice of correction from time to time. If it’s the latter, well, I have a pretty darn clever three year old.

Yelling aside though, here’s what I really want to talk about this week: Hypocrisy. It’s easy to talk the talk with all of you, but it’s tougher to walk the walk.

Here is my kitchen counter before a friend came over 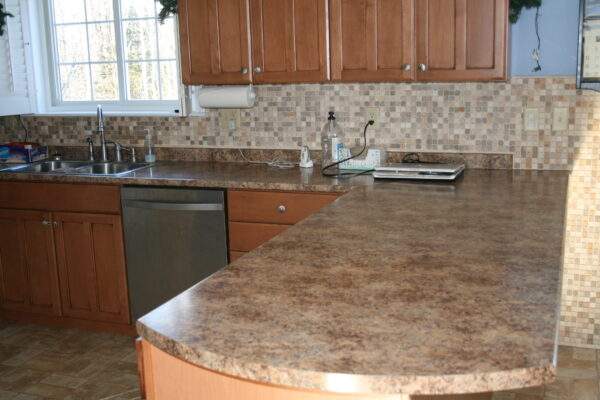 Nice, right? I keep things so tidy. I won’t bother mentioning that my friend was coming at 9:00 a.m. and I was frantically vacuuming at 8:56 a.m. Or that I was shoving the vacuum into our unbelievably messy and disorganized hall closet as she was ringing the doorbell. Okay, I guess I will mention those things because they’re real life. I can talk about being honest and admitting the fact that my house is a mess, but actually letting someone come into my house when it’s a mess is another story.

If she had shown up unannounced, this is what she would have found 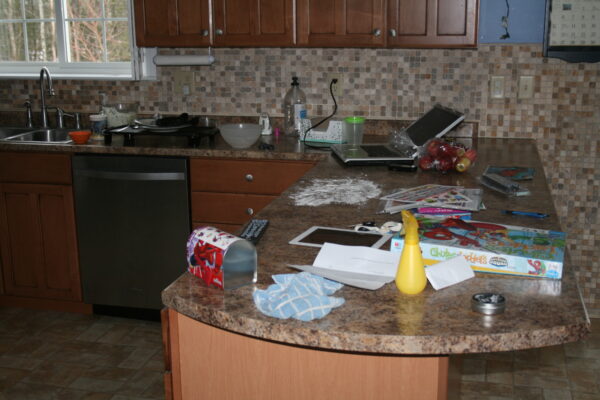 And I would have been so unbelievably embarrassed. I’m a little embarrassed showing all of you. I feel a burning desire to make excuses (I was making bread, I had just opened the mail, I was spending amazing quality time with my children and not worrying about temporal things that won’t create lasting memories). The fact of the matter is, this is the norm. My counter looks like Picture 2 much more often than it looks like Picture 1. Does that mean I’ll let it look like Picture 2 the next time my friend comes over? Doubtful. My hypocrisy runs quite deep, I’m afraid. But who knows; maybe by the end of this ‘Year of Honesty’ I’ll be ready to let real people into my real house without excuse or embarrassment. We’ll see.

And now I’ll leave you with a few more pictures of our real, everyday life. (By the way, I’ll be doing a weekly ‘homework assignment’ of sorts, related to each of these updates, on my Facebook page. Please join me there if you haven’t already!)

Here I am, hiding in the pantry, sneaking M&Ms (don’t even try to judge… I know you do it too!)

An incredibly rare selfie, made even more rare by the fact that I took it while unshowered and with only the sad remains of yesterday’s makeup on. Real life, baby. No one said it was pretty. (Although my kids are pretty stinkin’ cute, aren’t they?) 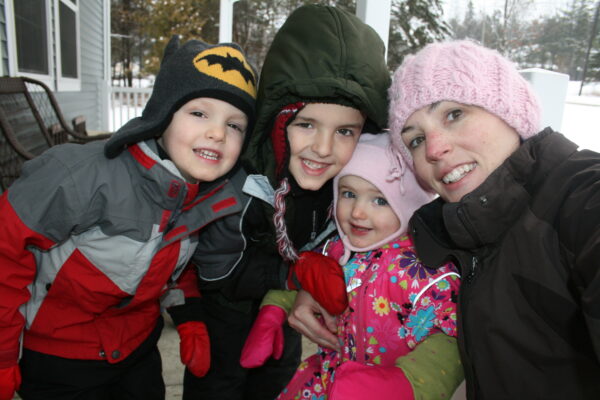 And finally, I just had to include this one. Samuel hasn’t taken naps since he turned two, so when I glanced in the living room on Sunday afternoon and saw this, my heart melted. I’m thankful that real life has its share of special moments. 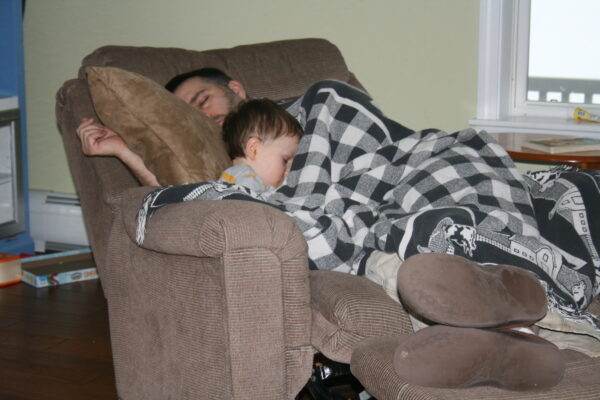