The form you have selected does not exist.

We all know the milestones to eagerly watch for: First smile, rolling over, first steps. We wait for them to happen and carefully document them when they do (well, for the first kid at least).

There are some milestones, though, that no one thinks to tell you about. They are just as momentous, in some cases more so, than the well-known ones, but if we don’t know what to look for, we could miss them entirely.

I’m here to help! This is in no way a comprehensive list since my children are still young. In ten years, when I’m in the throes of the teenage years, I’ll have to revisit and revise this post. But until then, here are 13 to watch for. 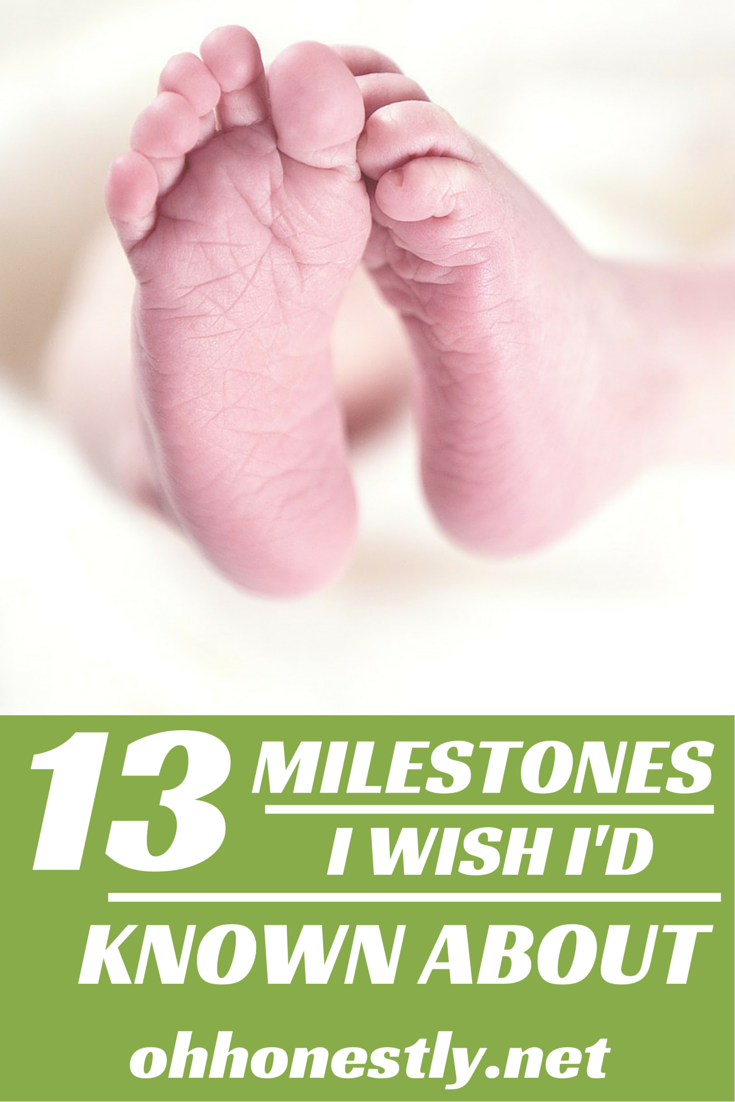 13 Milestones I Wish I’d Known About

Disclosure: This post contains affiliate links. I’ll receive a small commission on any purchases made at no extra cost to you. Thank you for your support!

1. The first time they poop on you

Maybe this is a rite of passage more than a milestone, but either way, you should know that it WILL happen. Maybe you’ll get some on your hand when you’re cleaning the baby up, or it’ll leak onto your leg while you’re holding them, or maybe, like my poor brother-in-law, it’ll shoot right into your eye when the baby poops in the middle of a diaper change. Welcome to the Parent Club!

2. When diaper changes are no longer easy

Right around the time your baby learns to crawl, he will also decide that diaper changes are a huge waste of time. Armed with his new found ability to move, he will do everything in his power to avoid the diaper change, which means you will have to do everything in your power to hold a squirming, turning, flipping, screaming child still while wrestling him into a clean diaper and trying to avoid repeatedly fulfilling #1.

3. When they can turn doorknobs

There’s something comforting about knowing you can close a door and your toddler has no access to the area behind it. Unless you’re excited to put safety knobs on every door in your house, this new accomplishment of your child is not a good one.

4. When your name on their lips is no longer magical

Let me guess: You and your significant other battled it out to get your baby to make the Ma or Da sound first. There’s something so wonderful about your name coming from the lips of your little cherub. Until, that is, your name is the only thing coming from her lips, 8 bazillion times in a 30 second time frame. Then you will wish with all of your might that she said your spouse’s name first.

Thankfully, they do say other things besides your name and “I love you” is one of the best!

Of course, the flip side is that they also say this, and it will probably come a lot sooner than you expect. Don’t think you won’t hear it until they’re teenagers. Most people I know have heard it (or some form of it… “You’re the worst Mommy in the world”, “I wish I had a different Mom”, etc.) by the time their kids are five. If you’re expecting and ready for it, it can actually be kind of amusing. Kids have big feelings. You gotta brush it off. They’ll be saying #5 again before you know it.

7. When they can throw up in a bucket

No doubt about it, the stomach flu is the worst. However, it’s so much easier when they know it’s coming and can actually puke into a container/toilet/whatever instead of all over something that’s really hard to clean, like their blankets or the rug or the couch. This is a milestone to celebrate!

8. When they can play outside by themselves

The age for this one will vary depending on your comfort level and where you live, but it’s pretty great (and a little scary) when it happens. Think about it. You can send them outside while you cook dinner in peace.

Everyone talks about losing the first tooth, but realizing it’s loose is just as exciting. Well, just as exciting for your kid. You’ll probably cry like a baby. Not that I would know anything about that…

10. When birthday parties no longer require your attendance

I’m still a little unsure about when this happens, but I think by First Grade, parents are no longer expected to stay (although I think at this age, you still can stay if you want to). I should point out that I’m talking about other kids’ birthday parties, not your own kids’ birthday parties. It would be pretty crappy of you to not stick around for those.

11. When they can take showers instead of baths

This could be a sad one or a glad one depending on how you feel about bath time. I dreaded it, so when my kids could start taking showers, it was awesome. It’s so much faster!

12. When they start to smell

This one hasn’t happened here yet, but I know it’s coming. Someday your sweet baby will stop smelling like Dreft and will start to smell like a boys’ locker room. When this hits, you’ll really be glad about #11 because you’ll be forcing him to take a lot of showers.

13. When they don’t want to cuddle anymore

This one hasn’t happened here yet either, but when it does my heart will break into a million tiny pieces. So for now, I won’t think about it and I’ll just enjoy all the cuddles I can get.

What milestones would you add? Tell me in the comments below or join the conversation on Facebook.