I have learned a lot in my time as a parent. No, not just a lot. I’m talking BOOK LOADS. I imagine any parent would say the same. Experience is truly the greatest teacher.

Most of the information I’ve learned is quite helpful. I can change diapers, calm a tantrum (sometimes), teach someone how to tie his shoes, discern between an angry cry and an injured cry.

What I didn’t realize when I became a mom is that I would also learn a lot of things that have no value at all.

Remember back in your school days when you’d complain to a teacher or parent, “When will I ever need to know this?” Well I’m here to tell you that these are the real deal when it comes to that question. You will absolutely need to know how to solve an algebraic equation before you will have any use for the following 6 things I have learned since having kids. 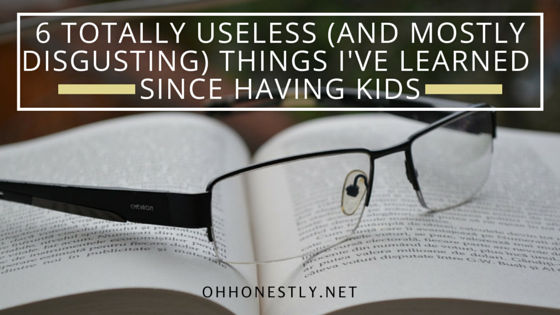 1. Baby poop can shoot across a room

I suppose it’s helpful to know this so that you can prevent it from happening while you’re changing a diaper, but other than that… not useful knowledge.

This lesson was actually courtesy of my nephew and occurred as we drove down a busy highway. I tried to coach him on nose blowing technique from the front seat, but that rubber band just wasn’t coming out. I asked what nostril it was in and he pointed to a spot on his forehead.

This was, of course, a bit disconcerting to me, but my husband assured me that unless my nephew has some weird head anatomy, the rubber band was not in fact stuck in his brain.

Thankfully, when we arrived at our destination, I was able to squeeze the free nostril shut, my nephew gave a good hard blow, and the rubber band was loosed from it’s snotty prison.

Regardless of the situation or the outcome, I can think of no good reason to know that a rubber band stuck in your nose feels like it’s stuck in your brain.

If my kids are going to get a stomach bug, it will always be on spaghetti night. I’ve cleaned a lot of puke off of sheets and I can tell you that most of the pasta my kids consume goes down the hatch whole.

Not useful and pretty disgusting.

Like half the length of their whole body. It’s kind of incredible actually.

I don’t have any use for this information, but hey, the more you know.

5. Corn doesn’t digest very much from the time it goes into a body to the time it comes out

6. You can often tell what your kids ate by looking at their poop

I remember going to wipe my little darling one time and being freaked out by the bright green poop. It took me a few minutes before I remembered those nasty tie-dyed cupcakes he ate at a birthday party the day before. There are more natural examples as well, which we affectionately refer to as ‘blueberry poops’ and ‘watermelon poops’.

I suppose knowing that this happens will prevent a parent from calling 911 when she sees weird colored crap in the toilet, but really, isn’t it all just too much information?

Never (ever ever) did I imagine myself writing something for the public eye that would be almost entirely about poop. So maybe I should add a #7:

7. Life with kids… it takes away all your dignity

What useless knowledge have you gained since having kids? Tell me in the comments below or on Facebook.