My son came home from kindergarten the other day carrying a blue quilted duffle bag I’d never seen before. He opened it with eager fingers to reveal its contents: a spiral-bound notebook and a little white teddy bear. It was his weekend for the Book Bear.

The concept of the Book Bear is similar to that of Flat Stanley. You take him with you to all kinds of fun places, snap pictures, print them out, and then write about his adventures with your family in the supplied notebook. It’s a great way to promote literacy and family togetherness, and each kindergartner enthusiastically anticipates his special weekend with the bear. 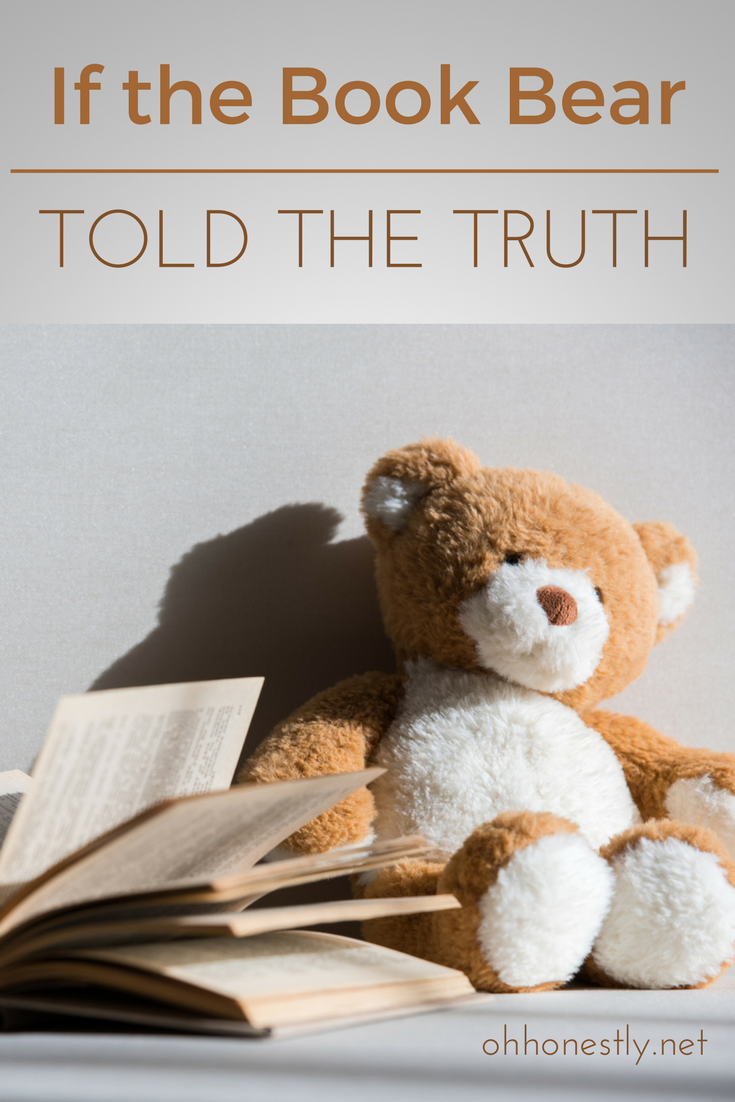 On this particular weekend however, I had completely forgotten about the Book Bear’s arrival. My dreams of a lazy weekend spent in our pajamas vanished in a puff of white fur as I thumbed through the pages of the notebook.

Book Bear had gone on a weekend camping adventure with one family to the aptly named Bear Point Marina (coincidence? I think not). The following weekend, he went on a bike ride and to the beach (how he wasn’t covered in tiny grains of sand is beyond me).

Clearly my plan to never leave our house would not do, so I dutifully carted the kids and Book Bear around town to document our adventures. He was read to among the book stacks in the public library. He played games at a school carnival. He hung out beside the pool while the kids went for a swim.

On Sunday night he wrote a note to the class to tell them about all the fun things he’d done with our family.

It really was a fun weekend, albeit tiring, but it got me thinking. Surely I wasn’t the only parent who altered my family’s plans because of the Book Bear.

What would happen if we all just went along like Book Bear wasn’t there? I think his letter to the class would look something like this:

This weekend I got to spend time with Benjamin’s family. They forgot me in the car the first night and I was kind of cold, but thankfully my blue duffle bag provided a bit of extra insulation.

On Saturday morning Ben remembered that I was in the car, so he came to get me and I saw daylight for the first time in 15 hours. Boy did that feel good!

We spent the next four hours watching cartoons and playing video games until Ben’s mom started yelling at him and his brother to turn off the screens and go DO something. There was a lot of complaining from the boys and threats from the mom and then we went upstairs so Ben could get dressed.

After lunch we went outside to play. Ben pushed me on the swing, which was nice of him until he decided to see if he could flip the swing (and me!) over the bar. I was really scared. I fell out a couple of times and landed on my head. Good thing I’m made of fluff!

After that Ben’s brother asked him to play soccer. The first couple of minutes were fun, but then his brother got mad because he said Ben cheated, so they started fighting and before I knew it I was squished in between them as they wrestled each other to the ground. Ben got hit in the eye and started screaming, so his dad came over to break them up. They both spent the next 15 minutes in timeout while their dad tried to scrub the grass stains off my fur.

Ben wanted to sleep with me on Saturday night, but his mom said, “No way! That thing is probably covered with germs.” It was pretty insulting and I cried myself to sleep on the hard floor beside Ben’s bed.

Sunday morning dawned gray and cool. The family was running late for church and there was a lot of yelling to “Get dressed! Why haven’t you eaten your breakfast yet? For the hundredth time, put on your shoes!!” I got kicked twice and stepped on once, but thankfully they didn’t think to take me with them, so I had a couple of hours of blissful peace and quiet while they were gone.

The afternoon was a little better. Ben’s dad and brother watched a football game. His mom was scrolling through her phone and kept making comments like, “Sarah’s family went hiking this weekend. They’re all looking perfect, as usual.” and “Wow, that pumpkin chocolate souffle looks delicious! I’m pinning that one!” Ben built a cool house on Minecraft and said it was for me, so that was nice. He even built a wall around it so the zombies couldn’t get in to eat me.

There was meatloaf for dinner, which both Ben and his brother refused to eat. Their dad said, “Your mother worked hard to make us this nice dinner! You’re eating it!!” and the boys both sulked in their seats and refused, and after about 20 minutes of arguing, their mom said, “You know what? Forget it. Make your own dinner from now on.” and the boys were like, “Score!” but they said it quietly. Actually it was more of a look they gave each other, but I could tell they were pretty excited about the thought of grabbing some graham crackers and chocolate chips when her back was turned. I don’t really blame them. That meatloaf looked gross.

About a half hour before bed, Ben’s mom told him he had to clean his room. He complained and complained and got grounded for a week before he finally went to his room and shoved a bunch of stuff under his bed, including my blue duffle bag. I tried to tell him, but he acted like he couldn’t hear me.

When we got up this morning, everyone got ready for work and school. They were all about to head out the door when Ben remembered me. He couldn’t figure out where my bag was, so the whole family started tearing the house apart trying to find it while his mom and dad made comments about being late and lack of responsibility.

I’m really glad to be back in the classroom. Do I really have to go home with another kid on Friday?