I suppose I better start off by saying that just because this post isn’t about not texting while driving doesn’t mean I’m against safe texting practices. Put down your phone and drive your car, you crazy coot. #itcanwait

Now that that’s out of the way…

If you’re reading this, I bet you text. I base this assumption on two things.

1) I only know, like, three people who don’t text and of those three people, two of them don’t even use computers.

2) Since it says right in the title that this is a plea to texters, why would you waste your time reading it if you aren’t one?

But I digress. Let’s get to my point in a rather roundabout, convoluted sort of way, shall we? 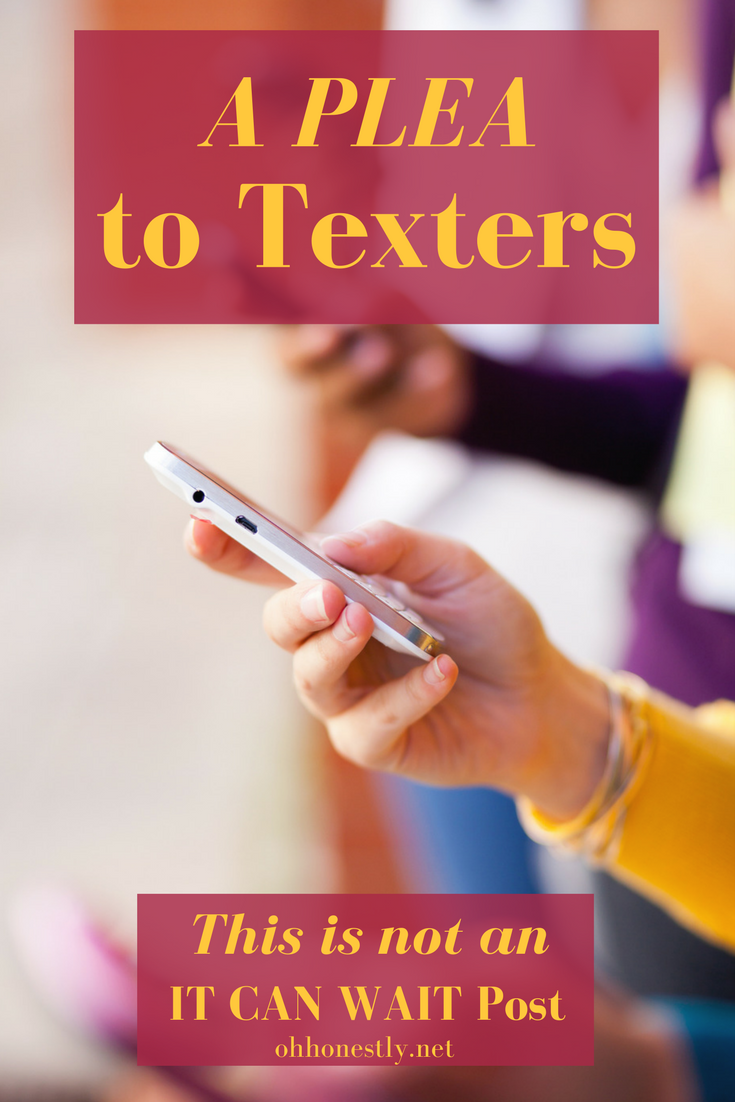 This post contains affiliate links. I’ll earn a small commission on any purchases made through those links at no additional cost to you.

Most of the people I know who text don’t text me. We’re acquainted, but not well enough to chat back and forth with our thumbs.

In fact, there is a select group of people with whom I text on a regular basis. My husband, mom, sisters, and a few friends are on that list. These are all people who I know well and who are on my contact list.

Back in April, my husband and I celebrated our anniversary. Part way through the day, my phone dinged and an unfamiliar number appeared on the screen with the message, “Happy anniversary! We hope you guys have a great day.”

“Hmm,” thought I, “Clearly this is not a wrong number. This person knows it’s our anniversary. But who the heck is it? It must be a couple or possibly a whole family unit, since the pronoun ‘We’ was used instead of ‘I’.”

I wracked my brain. My husband wracked his brain. We had no idea who it was, so I played it cool and shot back a generic, “Thanks!” The mystery texter never responded. I’m still trying to figure out who it was.

Every Christmas it’s the same thing:

Then all of a sudden I’m in group text-ville, receiving replies from a bunch of numbers I don’t know along with a few I do.

Ding! “Wish we were together!”

Of course, this mystery is a bit easier to decode. I just send off a private text to the person in the group I do know, asking who we’re talking to.

One time a Random Texter asked if they could use me as a job reference.

The number was vaguely familiar, but let’s face it, you don’t want to take the chance that you probably think highly of whoever it is when you might have to sing their praises to a potential employer.

I procrastinated answering for a day or so and luckily, the person messaged me on Facebook, where their name accompanies their message.

But here’s the kicker. This really happened.

Random number on a random day: “Lauren, I hope you’re well. Can you please let your parents know that my dad passed away? I don’t know their phone number. I appreciate it.”

Holy. Cow. First of all, this was definitely definitely not a wrong number. They addressed me by name.

Second, no generic reply in the world would ever be okay for this message. How do you pretend to know who you’re talking to when they just told you their dad died??

Third, I couldn’t even think of a kind way to tell them I didn’t know who they were.

“Hey there… you. So sorry for your loss. I’ll let my parents know. Oh, one more thing. Who is this?”

So I did what any tech-savvy lady would do.
I thought and thought and thought some more.
I knew what state they were in because of the area code, so I tried to think of every single person in that state who I had ties to (no easy feat since it was where I went to college).
I tried to think of who out of my college friends would be more interested in telling my parents about the death of his (her?) dad than me.
And then, finally, I did a reverse phone lookup.

Of course it couldn’t tell me exactly who owned that cell number, but it did narrow down my search parameters and I finally figured out who my mystery texter was.

It was a relief. A sweet sweet relief.

But before the relief, it was a big stressful annoyance.

So here’s why I’m rambling on about all the Random Texters. Here’s where all these inadvertantly anonymous texts lead me to my PLEA:

If you’re texting someone you don’t usually text, for the love of everyone’s sanity, tell them who you are!!!

It’s so simple. So easy. And apparently so often overlooked.