Recently I’ve seen a rash of people talking about the double standard of praise aimed at parents. Fathers get praised for everyday tasks, while moms either get ignored for those same tasks or worse, reprimanded.

While a dad is a hero for taking his kids out for dinner, a mom might be given the evil eye if her kids dare make too much noise while waiting for their food.

I understand the frustration. As a stay-at-home mom, most of my parenting tasks are taken for granted by everyone, including myself.

Sometimes I think it would be nice for someone to acknowledge the seemingly insignificant things I do, like taking three kids downtown to the library without anyone getting run over by a car or kicked out of the library for being too loud (both of those scenarios are real possibilities, but so far so good!). 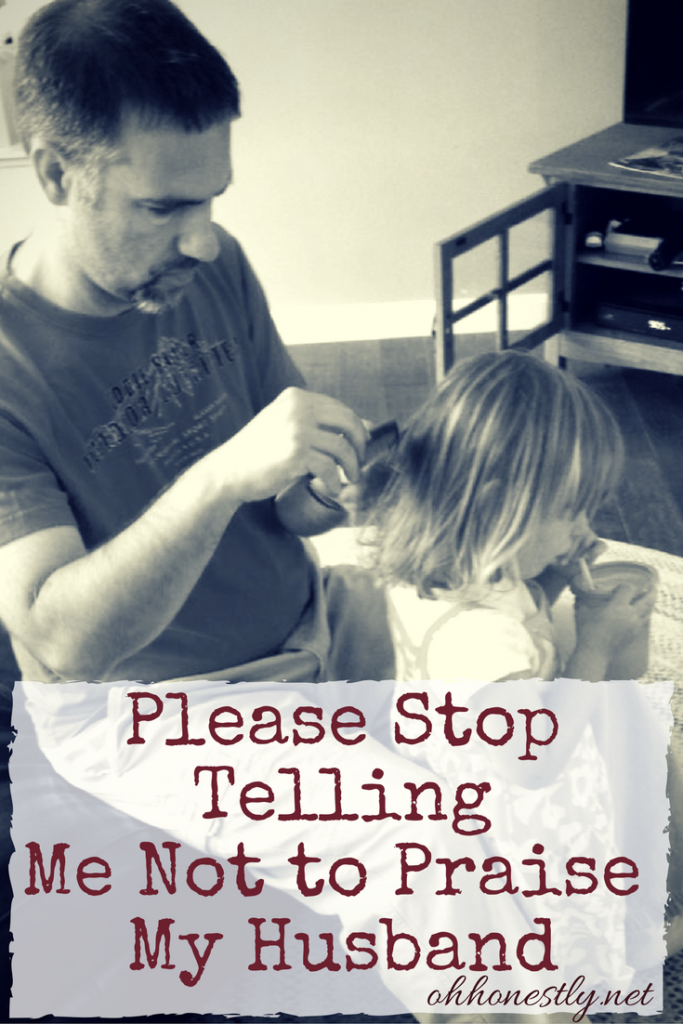 On the other hand, I also understand why people give accolades to dads for those same tasks. Since the majority of child rearing has fallen on mothers until recent history, it makes sense that there will be an adjustment period as people see dads doing what have traditionally been ‘mom jobs’. I’m not saying the double standard should remain, but I do understand that it will take time to go away.

Even so, I think we’d be wise to slow down before we decide how we want the double standard to go away.

I’ve noticed a troubling response to it by some women who have clearly had enough. They see a man receiving praise for being a parent and they call them out. “If he was a mom no one would be saying anything.” “Why should we acknowledge him for something that a mom does every day?” “I’ve never been praised for bringing my kids to the park. Why should he?”

Like I said before, I understand the frustration. But before we start attacking dads and the people who choose to notice that they’re doing a good job, can we stop for a moment and realize that there’s a better solution?

Just because moms don’t get praised as often as dads do, I don’t believe the solution to the problem is to stop praising dads.

Doesn’t it make more sense to continue the praise and extend it to moms as well? Wouldn’t you, as a mom, have a lighter step and a more ready smile if someone saw you at the playground and told you that you were a good mom? Wouldn’t the double standard disappear just as readily if we started praising moms instead of stopping praising dads?

So please don’t tell me to stop bragging about my husband when I see him being a good dad. It’s not gonna happen. But I am going to put more effort into noticing the little things my mom friends do so I can brag about them too.

Will you join me?