This post contains affilliate links. Purchases made through these links help support this blog at no cost to you!

Traveling with children can be stressful, whether it be a 15 minute drive or a cross-country odyssey. In June I left my husband and two sons in Maine and traveled with my 13-month-old daughter to Washington state to visit my sister and her family.

Our trip began at 7:30 am and ended 13 hours, 4 flights, and 3 layovers later. That’s a long day for anyone, let alone a one-year-old, but she did so unbelievably well!

I could give you every detail of our trip, but I’m smart enough to know that 99% of you don’t care. Instead, I thought I’d bestow upon you some pearls of wisdom I learned from our cross-country trek. Hopefully these tips will help relieve some of the stress of traveling with children.

Six Tips for Traveling with a One Year Old 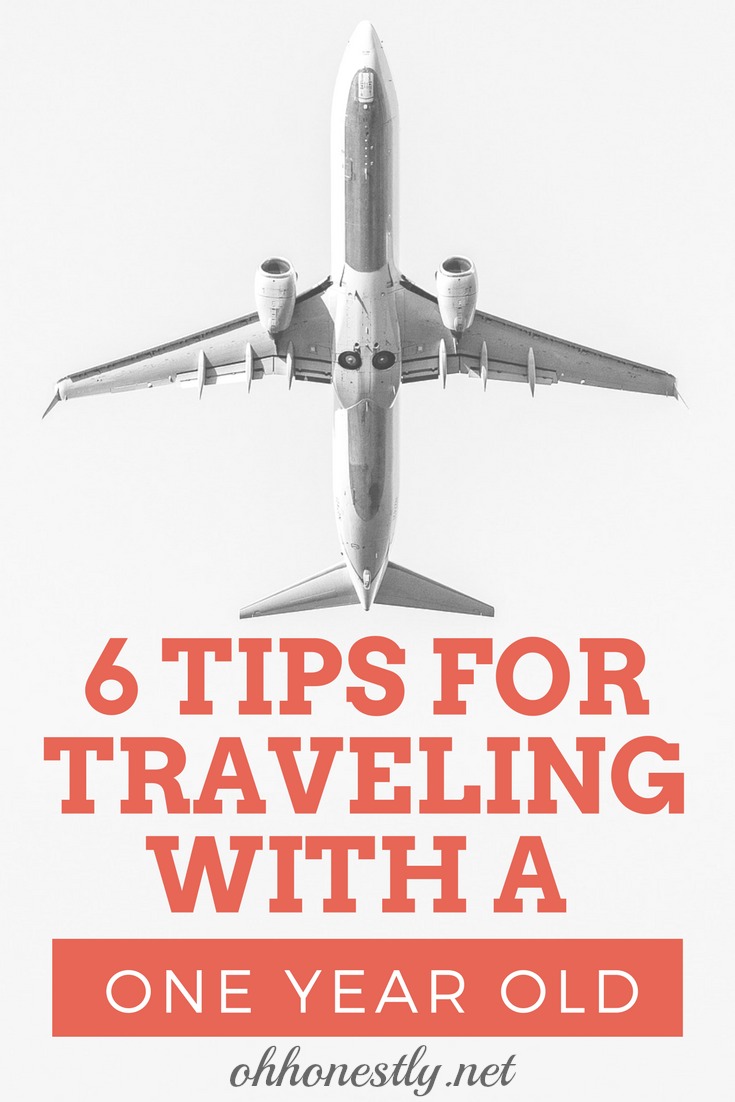 1) Hope for the best, but plan for the worst

I don’t have very much traveling experience and I was pretty freaked out about that portion of our trip. So I planned, and researched, and asked advice from anyone and everyone who had experience traveling with young children.

By the morning of our departure, I was as ready as I could be. I hoped that she would be a perfect angel the entire time, but I was prepared for her to be far less than angelic and I had a bag full of tricks to employ for the more trying moments.

2) Be prepared, but prepare to be flexible

You can plan every minute of your trip, but you better be prepared to throw your plan out the window at a moment’s notice.

I like to know what’s going to happen, so for our trip I had an idea of what I wanted to happen. Annelise would sleep through the first and third flights, get some exercise on our layovers, eat her meals and snacks on the second and fourth flights, and play with some of the many activities I had packed during the down times.

Of course, the first thing I learned as a parent (seriously, the very first thing I learned… before Eli had actually been born and they were wheeling me to the OR for a C-section that I hadn’t even considered as a possibility) is that plans are great, but they rarely work out the way we want. So although I knew what I wanted to happen, I also was ready for whatever was thrown at us.

Annelise was clearly not ready for a nap during our first flight, so instead of fighting to get her to sleep, we went with it. She didn’t like a particular toy I pulled out of the bag? No problem, I just grabbed another one. She’d eaten a pound of Teddy Grahams and was begging for more? Fine, it was just one day and it wasn’t going to kill her.

Being flexible is essential to the well-being of you, your child, and everyone around you.

3) Get a feel for the people around you

It was like an interesting social experiment, especially at the various airports we landed in. LaGuardia had some pleasant people in it, but a lot of people sitting around waiting for their next flights had that ‘back off’ look. Salt Lake City, on the other hand, was full of people who smiled, waved, and talked to us. If we ever decide to relocate, I think we’ll head west before we head south. (Kidding, all you New Yorkers!).

On the planes there were people who would immediately close their eyes and there were people who would smile and chat and even give Annelise little toys. Everyone was helpful (offering to switch seats if I wanted the aisle/window, pulling my overstuffed bag out for me, etc), but it was still good to get a feel for people. That way I knew how occupied I needed to keep Annelise. Would the person next to me be willing to put up with her tapping their arm a few times or would they be incredibly annoyed by that? Would the guy in the airport mind if she crawled near his chair or should I redirect her to a different area?

4) After you pack your carry-on, take at least a quarter of the stuff out

I packed for every possible situation and because of that, my backpack was loaded. It was fat and heavy and barely fit under the seat.

Plus, since it had so much stuff in it, it was hard to find anything inside, especially when I was crowded in a tiny plane seat with a baby on my lap, trying to fish around for a particular something that was way on the bottom.

And guess how much of the stuff in the pack we actually used? Not much.

I discovered that Annelise was pretty happy to play with the card in the seat pocket that tells you what to do if you crash in the water.

And of all the toys I brought, the ones she played with the most were these: A box of band-aids and an empty water bottle with straws in it.

It was the same sort of thing with the water bottle. Pull the straws out, put the straws in, chew on the straws, etc etc.

Oh, that reminds me! If you child has a pacifier, bring more than one! That way when one gets tossed on the floor, you can give her a clean one until you get a chance to wash the other one off.

Anyway, my point with the bag is this: You don’t need most of what’s in it, and you’ll be much happier if you don’t have to cart something around that could give you a hernia every time you lift it.

5) If you’re traveling alone with your child, don’t expect to have any down time

Since there’s hardly any room to move around on a plane, when we were done using something, I would just shove it in the bag with plans to reorganize during a layover. This was good in theory, but I forgot to take into account the active 13-month-old who was with me. I was too busy chasing her around the airport terminal to reorganize my backpack. It wasn’t a big thing, but it’s something to keep in mind.

Several people suggested that I buy Annelise her own seat so that she could be in her car seat for the trip. Their reasoning was that kids are used to being in their car seats, would be content to be strapped in for longer periods, and it would free up my lap.

This would have been perfect if I was bringing one of the boys with me. They are fantastic travelers and have always loved their car seats. They also sleep really well in the car. Annelise… not so much. She doesn’t like her car seat and rarely sleeps in it. I knew bringing her car seat with us would be a nightmare (not to mention having to cart it on and off four planes… yikes!).

So know your kid. You know what will work for them and what won’t. If everyone is telling you to bring little wrapped gifts to open along the way, but you know that your child gets all hyped up when he receives presents, then don’t do it! What works for one will not work for all.

There you have it. If you’re planning any trips soon, I hope at least something I’ve said will help you out.

By the way, the actual vacation portion of our trip was wonderful! We had lots of quality visiting time with my sister, my brother-in-law, my niece, and my nephew. The kids all loved each other and it was so good to spend time with them after being apart for so long. After such a successful trip, I’m already eager to plan our next adventure!