I’m always wary when strangers come to the door, so one Saturday when an unfamiliar vehicle pulled into our driveway, I was instantly on alert. 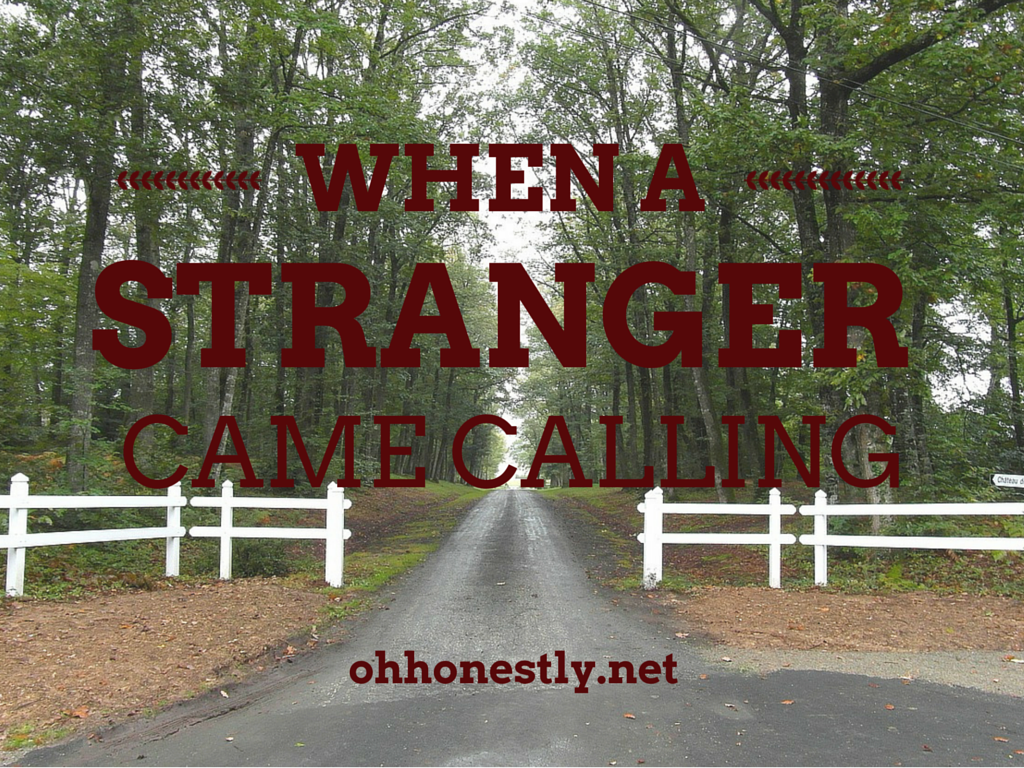 When a Stranger Came Calling

A young man in his late teens or early twenties, with unkempt, curly hair exited the passenger seat, and an attractive middle aged woman in a long down jacket stepped out from behind the driver’s door. I immediately eliminated Jehovah’s Witnesses from the list of possibilities and wondered if they were some odd pairing of political activists.

As they walked towards our front door, I hustled my young boys into the kitchen with strict orders to stay out of sight. At 1:30 in the afternoon, Eli was still in his pajamas and Samuel was running around in just a pair of underwear. The house, as usual, was in various states of disarray.

Eric had done a load of dishes, cleaned off the counters, and even tidied a couple of cabinets into a more orderly arrangement while I ran errands that morning. However, by the time I brought all the grocery bags in and we fed the kids lunch, the kitchen was once again a disaster. The living room wasn’t much better, with toys strewn across the floor, and blankets and pillows scattered in a heap where a fort had been hours before. All of the floors were desperate for a broom to pass over them.

It was no matter, I thought. I wouldn’t be inviting these strangers in.

When I opened the door, the pair quickly confirmed they were at the right house, then introduced themselves and the reason for their visit. A storm the week before had caused a tree to fall on the young man’s car. He lived in the apartment building beside the one we own and they were trying to determine whose property the tree was on in order to start the claims process. The woman was his mother and she was clearly the one taking control of the situation. Since Eric takes care of all issues pertaining to the apartment, I told them I’d get him. I then closed the door and left them standing on the step.

Eric, always a little more clearheaded than me and obviously more hospitable, invited them in when he came downstairs, and ushered them into the kitchen. As they made their way through the living room, I hustled the boys down the hall and into the bathroom with orders to ‘Stay here. I’ll get you some clothes.” Once I gave them their outfits for the day, I returned to the kitchen and began methodically clearing off the counters, trying to hide my embarrassment at the state of my home, sure this put-together woman was silently judging me as they discussed property lines and tax maps.

Occasional peals of laughter came from the bathroom. I went to check on the boys and once they were appropriately attired, I released them from their hiding place. As they rounded the corner and walked into the kitchen, the woman looked up for just a moment. She had been all business since the moment she stepped out of her car, clearly on a mission, but as she glanced at the boys I saw her face soften and a hint of a smile play on her lips.

The boys ran upstairs, the woman went back to her discussion with Eric, and I continued to clean the kitchen. But instead of looking at my home through what I determined were her judging eyes, I instead looked at it through the eyes she’d revealed a moment before.

As they finished their discussion and I finished wiping down the counter tops, I shed my embarrassment and said a prayer of thanks for my two boys who were still little enough to need me for all kinds of mundane tasks, like picking out their clothes and hiding them when strangers came calling.

One day in the not so distant future, they will have apartments of their own and I will have a clean home and beautiful clothing. And I know when that day comes, I’ll see a young mom, harried and unkempt, and I’ll wish for days gone by.