She sat at the counter, crayon in hand, while I stood on the other side of the kitchen, preparing dinner.

I glanced up, smiled at her, then went back to my work.

I laughed and moved closer, looked at her monotone scribbles (this time she’d chosen the purple crayon), and declared, “Great job, Annelise! That looks awesome.”

She beamed at me, then returned to her work. As I continued to cut veggies, the importance of what had just occurred hit me. 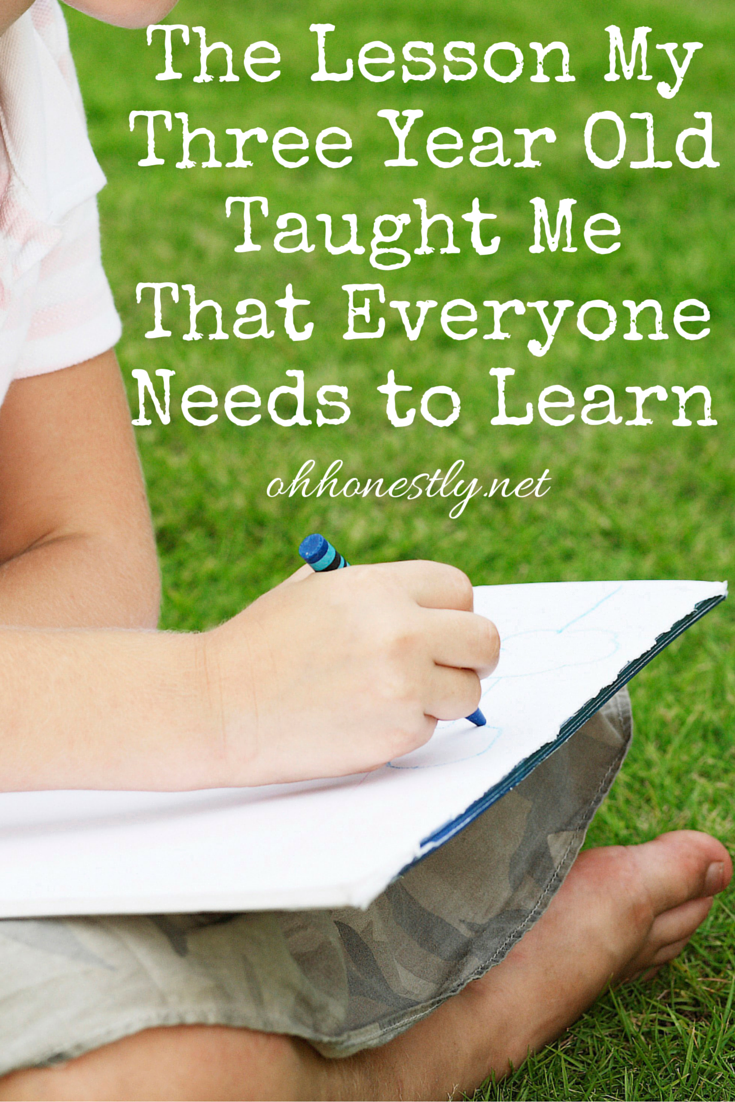 My three-year-old is really good at telling me what she needs. A cup of water, some yogurt from the fridge, help getting dressed, positive affirmation: Whatever the need, she clearly expresses it.

I can’t tell you how many times she’s crawled onto my lap and put her face right in front of mine as if to say, “Stop whatever you’re doing. Don’t look at your phone. Don’t look at my brothers. Don’t talk to my daddy. Just look at ME.”

And I do. I leave my face close to hers and watch as she transforms her features into an array of hilarious expressions, all created just to make me smile. Every time we share these up-close moments I marvel at the blessing of this little girl and the bond we share.

And it all begins with her telling (or showing) me her needs.

I don’t know if it’s a product of her age, her personality, or both, but I do know that as a 33-year-old introvert, I am not good at telling others my needs.

I can be stressed to the max, a million things to do and only hours to do them, but ask me if you can help and nine times out of ten, you’ll receive a polite, “Thanks, but I’m good.”

A perfect example: My sweet mother-in-law came to our house to help me for the week following each of my three c-sections. You’d think that after three babies, I would finally have learned to let it go, but it still made me supremely uncomfortable to see her doing my dishes and laundry. I’d struggle to do all the things I normally did, without asking for help, even though that was exactly why she was there.

Why is it so hard to express our needs to others? Maybe you’re good at it and you don’t need to read this, but I think it’s a problem most of us have.

Part of it, I’m sure, is that we’ve been raised in a culture that values independence above most other traits. Asking for help or saying that we need something is a sign of weakness and must be avoided.

But who are we helping by doing that? Is weakness really such a bad thing? We’re all weak in one way or other and life is so much better when we’re willing to admit it.

After that day in my kitchen with Annelise, I began to think about how she needed to hear positive words, so she told me to say them. She told me, in a very direct way, what she needed.

Which made me start thinking about what I needed.

I had something on my mind at the time and knew that in order to resolve the need, I had to talk to the other person involved. It was nothing earth shattering, but since I’m uncomfortable with any situation that might involve conflict, I’d been avoiding it.

But with my strong three-year-old in my mind, I did the hard thing and I said what I needed. The situation was easily resolved with no conflict and I discovered that maybe the idea of saying what we need is harder than actually doing it.

What do you need today? Maybe you can only think of one thing or maybe you can think of a million. Either way, I challenge you to step out from whatever veil you’re hiding behind, whether it be perfection, strength, self-sufficiency, or something else, and be willing to tell someone what you need.

It might be a little scary, but I bet you’ll be glad that you did.