Disclosure: This post contains affiliate links. (But don’t buy ANYTHING online without going through Ebates first! They pay you to shop.)

Men are pretty great. Take my husband for example. He’s an amazing father and spouse. He works hard for the kids and me every day. He can do all sorts of things that I’m clueless about, like fixing appliances, knowing what mixture of gas goes in the lawn mower, and squishing bugs without shuddering. And perhaps my personal favorite: He’s a total rock star when our family gets the stomach bug.

When it comes to throw-up I’m kind of a freak, but thankfully my husband is not. He’s taken over countless nighttime bucket-holding duties simply because he knows how much it grosses me out. I’ve heard the same thing about a lot of other guys too.

Which is exactly why I find a man’s reaction to the Common Cold so perplexing. 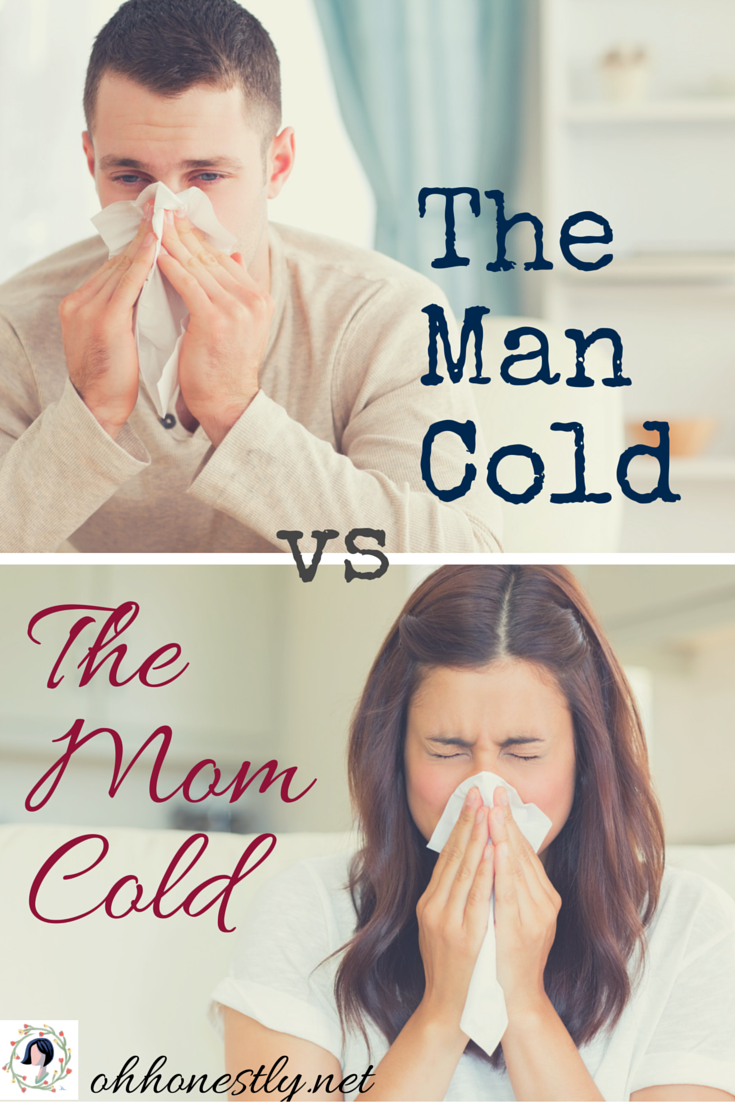 The Man Cold vs The Mom Cold

Men can handle barf without batting an eye, but as soon as they experience that first sniffle, you better watch out.

In order to explore this phenomena more closely, I thought it might be helpful to compare the Man Cold with the Mom Cold; two similar afflictions with vastly different outcomes.

The man arrives home from work and drops into his recliner.

“I’ve felt awful all day,” the man replies. Then he adds the six words that strike fear in the heart of every women:

The mom notices that she has a scratchy throat. She let’s out a quiet groan, then goes about the rest of her day.

The mom’s throat is still scratchy. She begins to develop a cough. She goes about the rest of her day.

The man uses an entire box of tissues due to his runny nose. He asks his wife to check his temperature three times. When she says he’s cool as a cucumber, he snorts in disdain and insists that he has a fever. He then piles four blankets on top of himself to prove his point.

While occasional moans signal to his wife how sick he is, her best reminders are the constant requests he makes of her: Hot tea to help his sore throat, honey and lemon for his cough, a heating pad because… body aches!, tissues for the non-stop runny nose, another blanket because four isn’t enough, the thermometer to check his temperature again (“Look at me! I’m sweating!! No I can’t take the blankets off; I’m freezing!”), homemade chicken soup, but only if it’s his mom’s recipe, etc.

The cough continues and the cold moves into her nose as well. She puts a travel sized pack of tissues in her purse and goes about the rest of her day.

The man only survived the night thanks to the grace of God and the modern marvel that is Nyquil. It only makes sense to take a sick day because getting out of bed will surely result in immediate death. Even staying in bed, he’s pretty sure his odds aren’t good.

He spends his day alternating between hallucinatory sleep, wishing his wife was there to take care of his every need, and crawling (literally; walking is out of the question) to the kitchen for sustenance and more drugs.

The alarm goes off after a sleepless night and she fleetingly entertains the idea of calling in to work so she can stay in bed. Then she remembers the project that’s due, the lunches that need to be made, the laundry sitting by the washing machine, and the kids’ after-school activities. So she gets up, pops a Dayquil, and goes about the rest of her day.

The previous day of rest seems to have brought him to the other side. Although he still feels terrible, he has a bit more energy and is able to go to work. By the end of the day, however, he is utterly exhausted. The night is spent laying on the couch, hogging the remote while dozing off and on until bedtime.

The mom wakes up feeling a bit better than she did yesterday, then goes about the rest of her day.

It’s getting better, he can tell. He’s still wiped out at the end of the day, but definitely on the mend.

She’s feeling so much better today that she mentions to her husband how glad she is that her cold is on it’s way out.

He looks at her in surprise. “You had a cold?”

Hey Moms, I know we like to soldier through, but it’s also good to have each other’s backs. Join me for a little encouragement!