Below: If you found ticks in your house, you probably have a thousand scary questions running through your head. Get answers from an expert below.

A few years ago, I found a dead tick in my bed. At first I wasn’t too alarmed; after all ticks are just a part of life during Maine summers. Then I started wondering if it had laid eggs before it died and before I knew it, I was on a paranoid Google image search. Once I calmed myself down, I wrote a humorous piece about how not to react if you find a tick in your bed.

Since then I’ve had thousands of visitors to that post, searching for real, helpful answers to their desperate cry: I found a tick in my house! What should I do?

Since that post contains absolutely no helpful advice, today I am finally answering the call!

I got in touch with Griffin Dill, a tick expert at the University of Maine Cooperative Extension. He coordinates the University of Maine’s Tick Identification Program and is working on a Ph.D in tick ecology, so he really knows his stuff. He graciously offered to help out, so I peppered him with questions about ticks in general and specifically about ticks in the house. I think you’ll find what he has to say both informative and, in many instances, relieving. 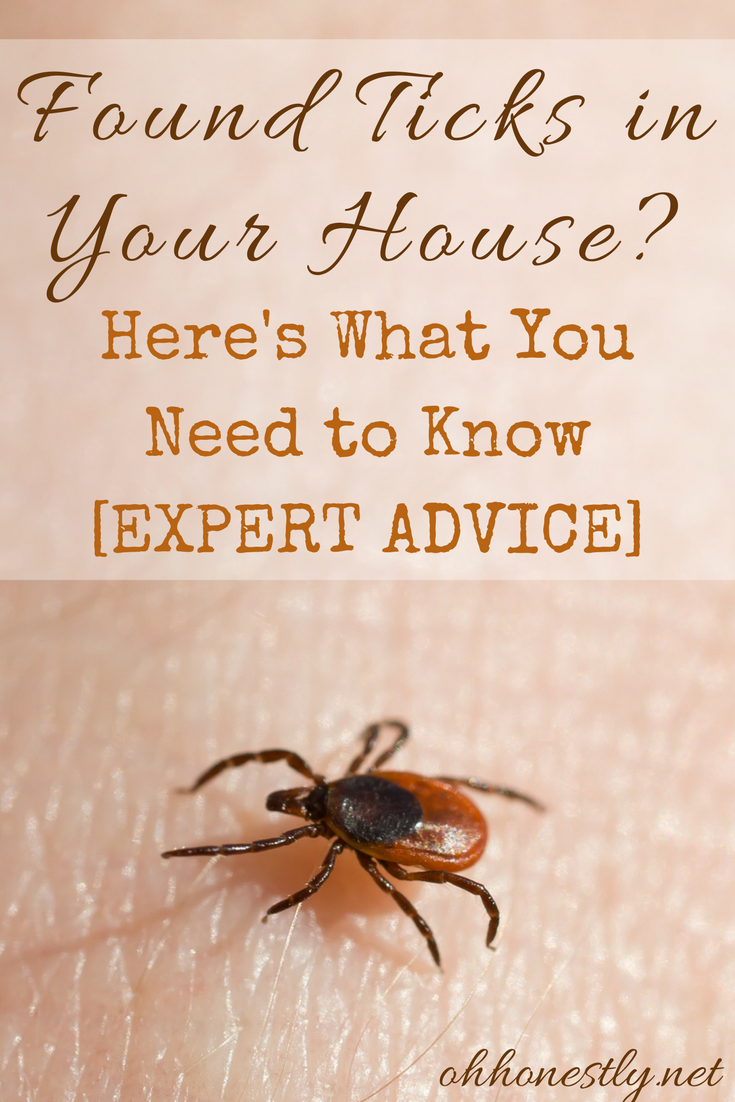 Found Ticks in Your House? Here’s What You Need to Know [Expert Interview]

Providing an estimate of the infection rate within the tick population is difficult because it can change across a geographic area and from year to year.

For the state of Maine, the infection rate is estimated somewhere in the 25-50% range, though this can vary significantly depending on location. Certain areas may experience infection rates as high as 75-90% or higher, while in other areas the infection rate may be less than 25%. This type of variation can occur in locations just a few miles apart.

When University of Maine Cooperative Extension’s new Diagnostic and Research Laboratory is complete we will be able to screen ticks for the pathogens they carry and may be able to better estimate the infection rate.

What is the life cycle and lifespan of a tick, and are certain stages more prevalent in certain seasons?

The deer tick is a three-host species, meaning that it feeds on a separate individual host during each of its three active life stages (larva, nymph, and adult). This life cycle takes approximately two years to complete, which leads to seasonal differences in the activity of the different life stages.

Eggs are laid during the spring and hatch a month or two later, leading to a peak in larval tick activity during mid- to late-summer. The larvae generally prefer feeding on small animals and are not often found on humans.

Nymph activity tends to peak from the end of June through July.

For adult deer ticks we see a small peak in activity in the spring and then a much larger peak in the fall.

Do ticks carry Lyme in all stages of their life cycle?

Lyme disease is not passed from a female through the eggs to her offspring, so the larvae emerge uninfected. It is from feeding on an infected rodent or bird that the ticks become infected. They can then carry and transmit the pathogen as nymphs and adults.

How long must a tick be embedded before it transmits Lyme Disease?

While there is some debate on this issue, it is generally thought that a tick must be attached and feeding for at least 24 hours (and probably more like 36 hours) before it begins transmitting Lyme disease.

The bacteria that causes Lyme resides in the tick’s gut. During feeding, the bacteria begins to multiply and must migrate to the tick’s salivary gland before it is transmitted to the host. This process generally takes around 24 hours.

Powassan virus, on the other hand, can potentially be transmitted within 15 to 30 minutes, thus it is important to locate and remove attached ticks as quickly as possible.

People often find my site because they found a tick crawling in their bed or an engorged tick in their house and they’re concerned about it. If you find a tick in your bed or on the couch or really anywhere in your home, are there certain things to look for to put your mind at ease? Is there a way to know if it fell off a person?

Unfortunately, there is no way to know whether a tick found indoors came from a person, pet, or other host.

Fortunately, deer ticks do not last long indoors as they need relatively high humidity (80% or higher) to survive. [They] readily dry out and die at humidity levels lower than that. Humidity levels within the home tend to be much lower than 80%, thus ticks that find themselves indoors die fairly quickly. Due to this, there is no concern about ticks infesting the home as they generally dry out and die within a day or so.

When/where/how do ticks typically lay eggs and what do the eggs need in order to hatch? Is it unlikely that a tick would lay eggs in your house?

After mating and feeding, the engorged female tick will drop from its host, utilize the blood meal to produce eggs, and then lay those eggs (as many as a couple thousand) on the ground in the leaf litter.

We’ve all heard prevention suggestions such as to wear light colored clothing, long sleeves and pants, etc, but as far as maintenance in our own yards and property goes, what do you suggest? My husband and I have three kids and a dog, and since they play outside a lot, we’ve always been apprehensive about treating the lawn or woods with anything. Are there any sprays or treatments that have proven safe for kids and pets?

Management of the tick population around the home landscape can be difficult as there is no “silver bullet” method that will eliminate the ticks. A combination of strategies (including the removal of leaf litter/brush piles, keeping lawns mowed short, trimming trees/bushes to let in sunlight, creating a gravel/mulch barrier around the perimeter of the yard, and the use of pesticide applications) can help reduce tick numbers.

Unfortunately, there is no pesticide that is completely “safe” as any product can cause potential harm in the right dose. The most commonly used and seemingly most effective chemical product for tick control is bifenthrin. Applications of bifenthrin or other chemical treatments are typically applied in late spring ahead of the nymphal peak and again in the fall to control adults. These sprays are generally applied along the perimeter of the yard/forest edge and in spot locations where people tend to recreate. Like any pesticide, bifenthrin does pose certain health risks, but if the product label is followed as required by law, those risks are relatively low.

The use of natural products, particularly those using essential oils, has become a popular option for tick control, but there is little research on how well they actually work or any potential health/environmental impacts.

Sprays/treatments using a pathogenic fungi (Metarhizium anisopliae) to kill ticks are also available, though they tend to be relatively expensive and usually need to be ordered online.

A big thank you to Griffin for being willing to answer my questions. I know it was a huge relief for me when he said that ticks found in the house can’t typically survive for more than a day.

Keep checking back, as I plan to publish another interview with a medical expert on Lyme Disease!