While out shopping one day you run into a friend you haven’t seen in a while. You chat for a few minutes and when it’s time to part ways say, “We really need to get together! Check your calendar and give me a call.”

The friend nods enthusiastically and promises to do just that. You both mean what you say, but the phone never rings and before you know it, you’re bumping into that same friend at the same store six months later.

Our excuse for this is often that ‘life gets so busy’. I don’t buy it.

Sure life is busier with kids than it was before kids, but there’s no way everyone’s calendar is so booked up that they can’t spare a couple of hours somewhere.

I’ve done some brainstorming and come up with the top five reasons we don’t want to hang out with you. See if any ring true for you. 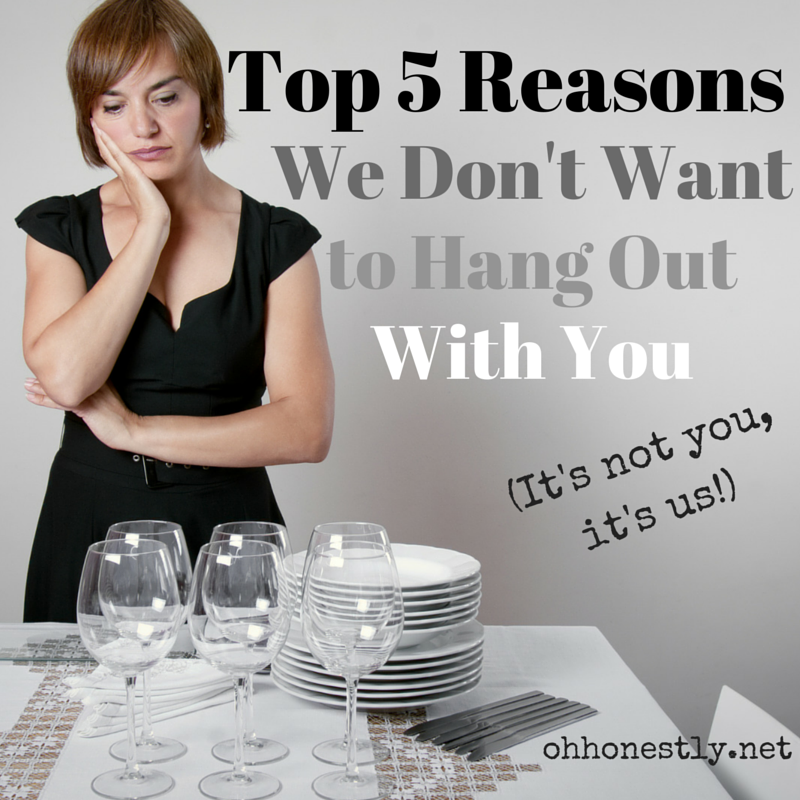 Socializing requires talking and listening, and that’s tiring, especially when we’ve already spent most of the day doing that at the office or at home with the kids. We really just want to put the munchkins to bed, throw on some sweatpants, and sit in blissful silence.

This goes hand in hand with number 1. Getting together with you requires a lot of work.

If we go to your house we have to get the kids ready, make sure we have changes of clothes for them, snacks for our food allergic son, toys that will keep them busy. We also have to get ourselves ready which means we can’t wear our sweatpants (see above).

If you come to our house we have to get the house clean, figure out a menu, and get the kids and ourselves ready, which means we can’t wear our sweatpants. It’s not that we’re unwilling to do these things, it’s just that they’re a lot of work and we’re tired (translation: lazy).

3. We’re worried our kids will destroy your house

This is a valid worry if you’ve ever met our kids.

They don’t mean to be destructive, but there are three of them and they can pull every toy off your carefully organized shelf in two minutes flat. We’ll make vain attempts to return things to their proper place, but we don’t know where the proper place is, so you’ll say, “Oh, don’t worry about it. It’s really no big deal. I’ll take care of it later.”

And even though we would say the exact same thing and really mean it because our stuff is always all over the place anyway, we will suspect that you’re just lying to be polite. So we’ll head home, certain that you’re cursing us while re-alphabetizing 85,000 books.

4. We’re worried our kids will do/say/play some way that offends/horrifies/angers you

I’ll illustrate with a real life example. Not long ago, I took my kids to a friend’s house for a play date. My son decided to play ‘hunting’; not an uncommon game in our house since my husband is a hunter. He made some comment that prompted me to remind him that we only shoot the animals we’ll eat.

It was only after I said this that I remembered my friend is a vegetarian. Her poor little girl was probably traumatized at the thought of her stuffed bear being shot dead and gobbled up for dinner.

There is of course the possibility that we find you completely annoying and unlikable. If this is the case, we’ll see your number on our phone and let it go to voicemail.

Then the next time we see you at the store we’ll feign ignorance. “You called and left a message?? Hmm, strange. I never got it. Are you sure you called the right number?”

Clearly the saying “It’s not you, it’s us” is the driving force behind our reluctance to hang out with you. We think you’re a lovely person, but we’re tired and lazy and we’re worried our kids will misbehave and make you judge us. Or maybe we just don’t like you. But we’ll let you figure that one out on your own.