There comes a time in every person’s life when they realize they aren’t as young as they used to be. 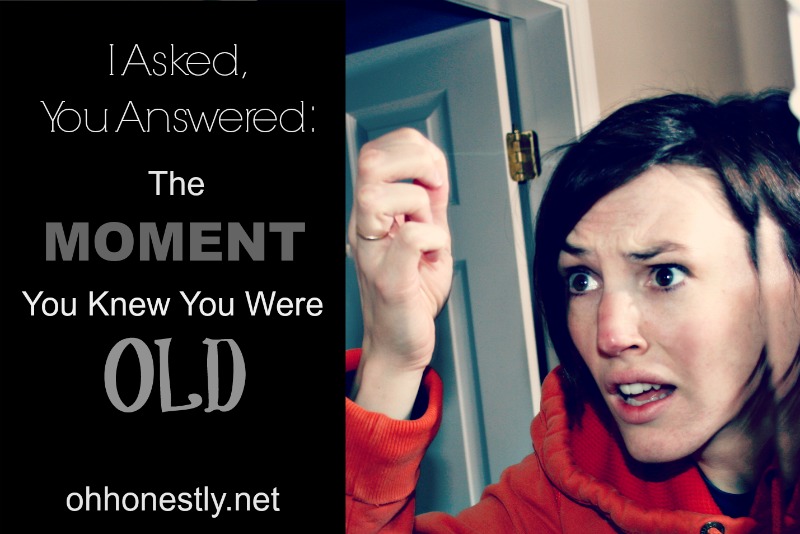 The Moment You Knew You Were Old

I don’t know about you, but I feel like I stopped growing when I was in my early twenties. My rational mind knows that I’ve gotten older with each passing year, but my typical frame of mind is that I’m not that much older than those high school and college students I see around.

There have been a few wake-up calls, however. Like when I saw a kid, who I was sure was in elementary school, hop behind the wheel of a car and drive away.

Or the day I found out a girl from the very first class I taught (fifth grade) was getting married.

This week I asked the question to my newsletter subscribers:

What was the moment you knew you were old?

The responses, as you’d imagine, were great:

“The moment I knew I was old was when I spoke and heard my mother come out of my mouth!” -Jackie B.

“Last night after a deep conversation about gangsta rap with a coworker’s husband, I made the mistake of asking if he remembered when Tupac died, to which he replied ‘Nope, I was born in 1988.’ ‪#‎whendidigetold‬ “ -Nikki S.

“My moment was this past summer. I work at a car rental counter and our competition had hired a 21 year old, fresh out of college. When he told me his age, I immediately thought, ‘Crap, I could be his mother.’ I’m 39, but that really hit me.” -Emily M.

“Though I’ve been living in the realm of thirty for a handful of years, I’ve never actual felt old…until I found my first gray hair.” -Kristen H. in her blog post Those Aren’t Gray Hairs… They’re Strands of Shimmer

And my personal favorite:

“The moment I felt old was when guys (men) started to check out my 17 year old daughter (instead of me)! If a guy turns his head to me these days they are always 10 years older than I am. Well, I think they are older, haha. I am 47, but sometimes forget all about that ;)” -Barbara A.

What was your moment? Tell me in the comments below.

Want in on the fun? Subscribe to my newsletter to receive the weekly question. Then send me your answer and it may be featured in a blog post!