In a couple of weeks my son will walk through the doors of your classroom and for the next nine months many of his waking hours will be spent with you.

I know as the days, weeks, and months pass, you’ll get to know a side of him that even I am not familiar with. Even so, I’d like to tell you a few things about this boy of mine. You see, he may be only five, but he’s already a master of deception.

But please, whatever you do, don’t let him fool you. 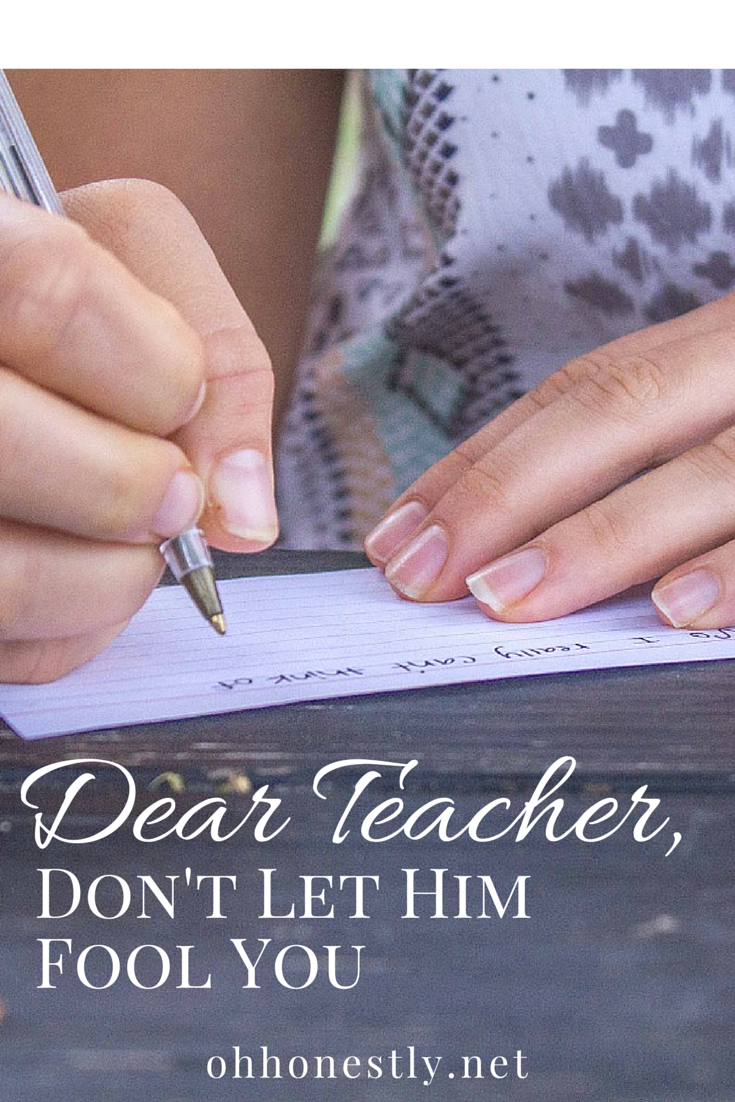 He might be shy and quiet at first, especially with all the other kids around. He’s not one to jump into the spotlight or take control of a group.

Given the right time and circumstances, he’ll talk your ear off, and he’s well-versed in the art of quiet persuasion.

So I hope you have moments when you can talk with him one on one. You’ll see a side of him in those conversations that you might otherwise miss.

You may have trouble understanding him sometimes. He’s been working hard to improve his articulation, but it can be easy to miss what he says, especially when he’s excited and speaking quickly.

He may seem a bit young because of his speech, but that mind of his never stops imagining and figuring things out.

So please don’t rush him or brush him off if you can’t understand him right away. Remind him to speak slowly and clearly and take the extra few seconds to listen to him. His ideas are well worth hearing.

He’ll probably declare how great the boys are in his class while claiming to dislike all the girls.

This is the same boy who spent the month leading up to Valentine’s Day wanting to boycott the ‘girls’ holiday’, then ended up giving every girl in preK a red rose because the Transformer valentines we bought just wouldn’t do.

So don’t pass him off as just another typical boy. He is thoughtful in ways you wouldn’t expect.

He may talk constantly about superheroes, ninjas, and army guys.

That ‘all boy’ persona is only part of his personality. He is incredibly creative and loves to do projects and experiments.

So if you can, please provide him with hands-on learning experiences. You’ll see him come alive if you do.

He likes his space. He isn’t big on hugs, kisses, or cuddles.

This boy is one of the most sensitive kids I know. He feels big and he loves deep. He was heartbroken when I stopped watching the little boy I’d been babysitting for a year, and he sobbed when I told him that his cousins were moving away.

So be gentle with him please. You might not think your words or actions are having much of an effect on him, but they are. More than you know, they are.

I know your job is difficult. I know how much effort, time, and heart you put into it. I know you have many children to think about other than my son.

But don’t let me fool you.

I also know you’re up for the challenge.

A Mom Who Loves Her Son and Appreciates His Teacher