“Mummy, I hafta pee!” My freshly potty trained two year old dashed into the bathroom where I was blow drying my hair, tugging at her pajama pants as she ran. I set the blow dryer on the counter, scooped her up, and rushed to the toilet, unwilling to test the urgency of her declaration for even a second longer than necessary. 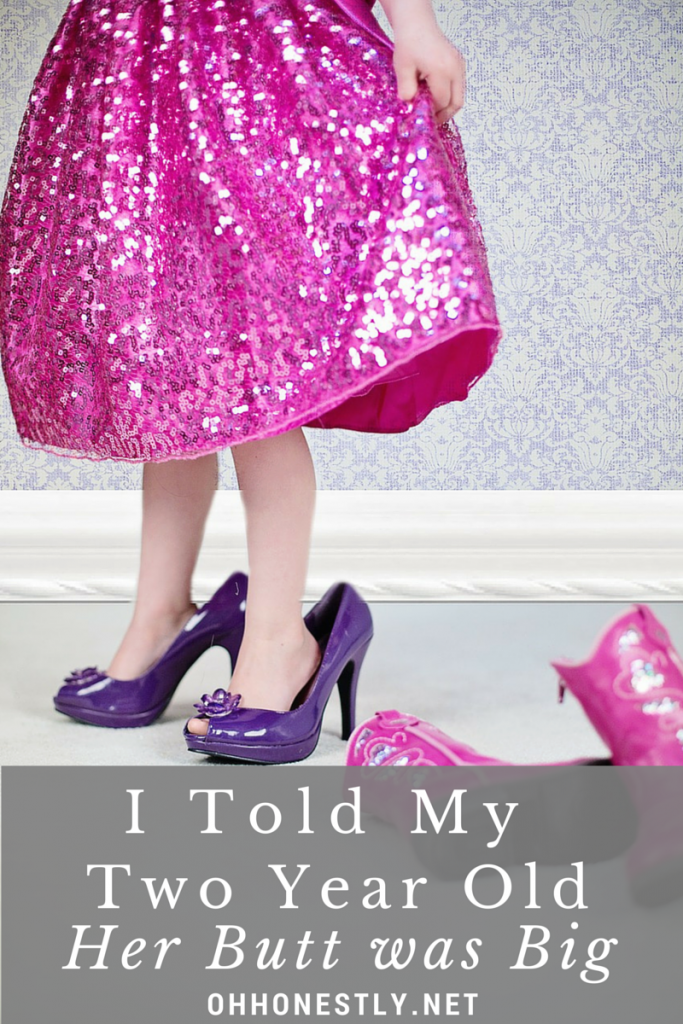 As she settled onto the seat, she leaned over to peer into the bowl and asked, “Why my bum-bum big?”

Only milliseconds passed between her question and my answer, but it was enough to consciously think of the natural rebuttal, “Your bum isn’t big!”

Instead I heard myself saying, “Everyone’s bum-bum is big.” I paused for a moment before adding, “God made them nice and soft so they’re comfy to sit on.”

As she finished her business, what I’d said suddenly dawned on me. I’d just told my daughter she had a big butt.

My consternation quickly faded though, and I realized that perhaps I had stumbled upon something important.

The questions she asks and the statements she makes are out of pure observation and curiosity. She notices that her brothers don’t share her anatomy, that her mommy’s skin is red and freckled, that her bum-bum is big. She does not see these things as imperfections. They simply are and she wants to know why.

I could easily have responded to her question that morning by exclaiming, “Your bum isn’t big!”, but what would it have accomplished? My little girl is smart and only a few such statements would alert her to the fact that having a big bum must be undesirable.

Instead, I focused on what she was really saying. Regardless of how fat or thin we are, our butts take up a good portion of our bodies. They’re round and they stick out a little. Yes, some are bigger than others, but we all have them and to a two year old, they all look big.

Our culture loves to talk about body image. About the problem of girls making themselves sick to try to look perfect. About the fact that photos of models are airbrushed and photoshopped almost beyond recognition.

Perhaps the conversation needs to change.

Maybe instead of reading into every comment made about our bodies, we need to take such statements at face value and realize that an observation is not necessarily an insult. Maybe instead of trying to bolster our daughters’ self-esteem by telling them, “You’re not fat!”, we need to remind them (and ourselves) that healthy people come in all shapes and sizes.

Maybe we should start looking at our bodies as amazing creations instead of as things in need of constant tweaking to meet a made-up ideal.

Will the conversation be easy to change? No. I’m sure I’ll fall into old habits again and again. But if my daughter catches me bemoaning my lost boobs, I’ll try to remember to tell her how they nourished three incredible people. And if she spots me examining my face in despair, I’ll do my best to stop and explain all the varied abilities of skin.