It became apparent as soon as we stepped off the airplane. I noticed it amid the hustle and bustle of gathering kids and carry-ons, threading our way through the crowds to baggage claim, and finding a porter to help with our monstrous pile of luggage and car seats.

People of every color flowed past us in all directions. Languages I could only guess at battled with my children’s excited chatter for my attention. The homogeneity I’d unwittingly become accustomed to was nowhere to be found.

We were not in Maine anymore. 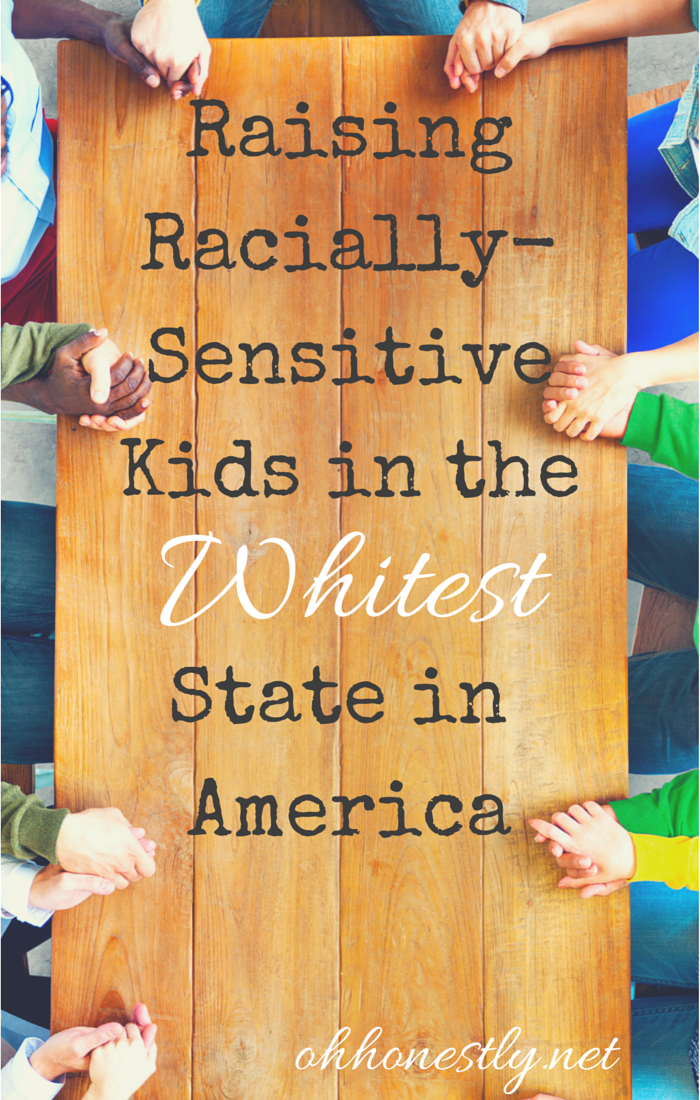 Raising Racially-Sensitive Kids in the Whitest State in America

My husband and I are raising three kids in the whitest state in America.

According to 2014 data from the U.S. Census Bureau, over 95% of Maine’s population, my family included, is white.

Most of the time, I don’t even realize it. I’ve lived in Maine my entire life, other than a four year out-of-state college stint, and I’m used to it. But any time I leave the state I quickly become aware of how racially similar the majority of Mainers are, and it makes me wonder how to raise racially-sensitive children in this setting.

The school my two oldest attend has only a handful of non-white students, as is the case in many Maine schools. The primary exposure my children have to other races is through television shows, which obviously is not ideal. Even so, my kids seem largely unaware of racial differences.

When one of my sons decided to mimic the pirates in Peter Pan Live he told me who he was pretending to be by pointing out the man’s bald head, not the fact that he was the only black pirate in the cast.

These events hearten me, not because I want my children to be colorblind (I don’t), but because when my children see color, they don’t see it as an ‘us’ and ‘them’ proposition.

My kids are young and unaware of the racial tension that has bubbled up and boiled over into the public eye around our country this past year. They are beginning to learn about the historical atrocities and struggles that the African American community has endured, but they haven’t yet seen how those prior struggles translate into the prejudice and problems of today.

In some ways, I’m thankful for this and in other ways, I know that these are conversations we need to start having.

I love the fact that if my children could continue in their current line of thinking, racism would never be an issue because it would never occur to them to make it so. Right now, color is just another way to describe a person and the idea of treating someone differently because of it is ludicrous to them. Although I have no desire to ignore the rich cultures and traditions of other races, I appreciate my children’s simple way of viewing the world.

Unfortunately, I also know that they do not live in a bubble and at some point, they will learn that their identity as white people will afford them certain privileges that other’s do not always have. Perhaps more concerning  is that this knowledge, coupled with the lack of diversity in our state, might lead my children to treat people of other races differently than the way they treat other white people.

I wish I could claim to have a plan that would take care of all of my concerns, maybe five easy steps to raising racial-aware kids, but unfortunately that’s not the case.

Instead, I imagine I’ll handle it the way I’ve handled most important and delicate issues that have arisen during my short time as a parent: With plenty of prayer that I won’t screw it up and with a willingness to engage in potentially uncomfortable conversations that might raise questions I can’t answer.

It’s not perfect and it’s not enough, but it’s a start. I’m learning as I go.