I wrote this post in October of 2012. It was the second post I ever published on my (now defunct) first blog. I still remember all the mixed emotions of this moment. Nothing about parenthood is easy, is it? 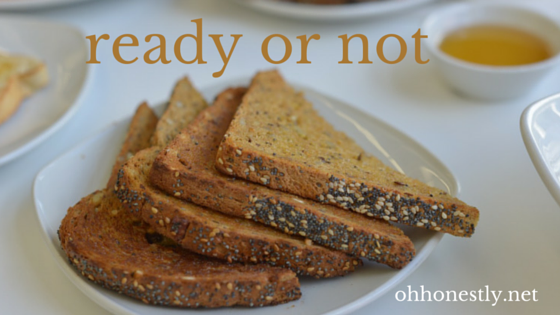 I’m sitting here trying to work up the nerve to eat a piece of toast. It’s a simple enough series of actions. Bite, chew, swallow. Funny how something so seemingly insignificant can hold so much meaning.

Here’s the thing: if I eat this toast, I’m forever closing a chapter in my life that I’m not so sure I want to be over.

Ever since I was little it has been my heart’s desire to be a wife and a mom. My first dream came true six and a half years ago when I married Eric. Two years later the second dream came true with the birth of Eli. He was such an easy baby. Of course it was an adjustment to suddenly have this little person who was totally dependent on me for every aspect of life, but I loved it. Motherhood is what I was created for.

Our second son, Samuel, was not so easy. He had food intolerances, allergies, and a bad case of eczema. But he was a happy little guy, and I found the transition from one child to two a fairly seamless one.

Eric and I always talked about having three kids, but for a while he thought our family of four was complete. I knew it wasn’t and he soon agreed to one more. Our third baby (a girl!) was born five months ago today.

I’ve been trying to savor every moment this time around. One, because with two kids already under my belt, I know how fleeting this stage is, and two because, unless God decides to send us a BIG surprise, she will be our last.

Knowing this has made everything bittersweet. Midnight wake-up calls aren’t so much a bother as a chance to relish the feel of her tiny, soft fingers wrapped around mine (plus she started sleeping through the night at six weeks, so I haven’t had much to complain about in that department!). Screaming fits have been less stressful because I know that her little newborn wail will soon change into a baby cry, which in turn will change into a toddler whine.

Don’t misunderstand; I am far from being a perfect mom. It seems like the patience I have lavished on Annelise (which isn’t constant by any stretch of the imagination) has been taken out of the supply I have for my older two. It’s completely unfair, I know, but… honesty! However, I’ll save all that for another day because none of it has anything to do with toast.

I’ve been nursing my sweet girl since birth and she’s been having the same problems that Samuel did as a baby, the biggest one being blood in her poop. I’m not going to get into a long medical explanation. I’ll just say that certain types of food bother her developing digestive system.

In an attempt to get to the root of the problem I have cut certain foods out of my diet. First dairy. Then wheat. Then soy. Then eggs and nuts. The problem has persisted.

I’ve been told she’ll be fine. That she is gaining weight exactly as she should be. That she is healthy in every other respect. That the amount of blood in her stool is nothing to be concerned about. The people who are telling me this are not the ones who are causing their baby to bleed.

So I’ve come to the agonizing decision to stop nursing. Some will wonder why I didn’t do it sooner. Others will wonder why I’m not doing more to try to keep nursing. I suppose my answer is the same to both: I don’t know! What makes perfect sense one day makes no sense the next.

There are days when I see the blood, hear her pained cry, long for a slice of pizza, and know that everything could be fixed by making the switch.

There are other days when I feel the closeness of her as she eats, realize that these days are numbered, and can not fathom changing to formula.

I also feel so incredibly selfish no matter what way I turn. If I switch to formula, I’m not trying hard enough. Breastfeeding is so important to a baby’s health. We’ve all seen the studies. There are other foods I could cut out. The doctor said that corn, chicken, and beef are next on the list. What kind of terrible mother puts her own appetite before her baby’s health??

Then there’s guilt on the other side. If I don’t switch to formula, I’m just prolonging her hurt. What if prolonged exposure to whatever is bothering her in my breast milk causes long term issues for her? I’m praying she won’t end up with food allergies, but there is a very good possibility that she will.

And what about the rest of my family? Is it fair to my boys to have a crabby mother who is losing a little more weight each day? At five months postpartum I’m down to my high school weight and if I continue to nurse, I will only lose more. I know that doesn’t sound like a problem to complain about, but I’m not interested in being extra skinny. I’m interested in being healthy so I have enough energy for my kids.

Not to mention my poor hubby who has uncomplainingly put up with my sub-par meals for the past four months as I try to avoid cooking for three different dietary issues (normal, dairy allergy, and me) and just make something that everyone can eat.

Oh the guilt! Every time I think I’ve left it behind, it catches up and taps me on the shoulder.

But I’ve made the decision. We’re making the switch. She’s done quite well moving from breast to bottle, especially considering how completely nasty Nutramigen is (another thing to feel guilty about!).

I’m still having a hard time though. The thought of never nursing her (or any of my babies) again makes me tear up every time. I’ve been both bottle feeding and breastfeeding because I just can’t let go yet.

So here I am at the kitchen counter with a slice of toast in front of me. It’s been over 24 hours since I last nursed her. She had a stool with blood in it yesterday which only strengthens my resolve that I have to let go, but taking that first bite is proving to be quite difficult because once I do, there will be no going back.  I will forever be done with that part of my life.

But I wipe away my tears and bring the toast to my mouth.