The taking away of the pacifier. 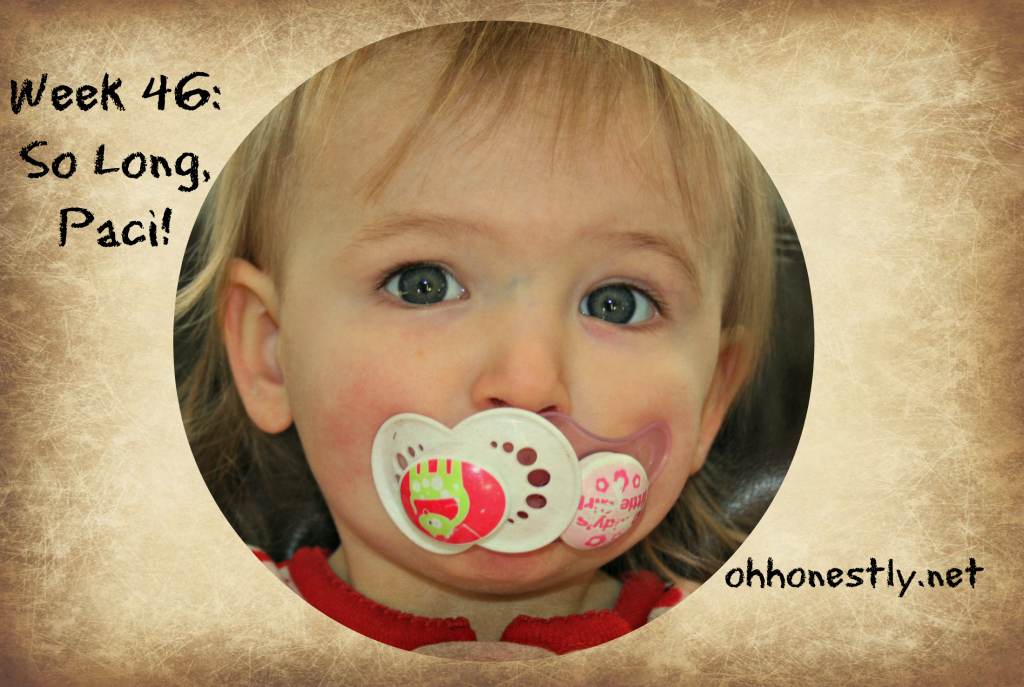 As time has gone on and Annelise has gotten older and older, I’ve known we need to bite the bullet sooner rather than later. She’ll be three in the spring, and while the paci (or saci, as she calls it) hasn’t hindered her language development in the slightest, every time I look at her teeth, orthodontic bills start appearing in my nightmares.

The problem is, she loves that thing. She doesn’t have a blanket or stuffed animal that she’s attached to, but her pacifier is most definitely her ‘lovie’. Just the thought of taking it away has racked me with guilt and sadness, but I’ve known that it has to happen, even though I’ve been able to find excuse after excuse for putting it off.

Well, last Monday, the decision was made for me. While they were playing, Samuel hid it on her and when nap time rolled around, he couldn’t remember where it was. I put her to bed and told her I’d look for it, but she quickly got up because hel-lo; nap time with no paci was kind of ludicrous.

That night I laid her down, promising again to look for it, and this time, due to exhaustion and her darker surroundings, she was soon fast asleep. No crying, no whining, no screaming. I was surprised and elated, but sure we would be in for it the following night.

However, on Tuesday she again refused to nap, but went to bed with no problem.

Wednesdsay: ditto. Except this time when I put her down for a nap, she got up, started playing in her room, and when I went up to check on her, she’d found the darn thing. It was quickly confiscated, I let nap time slide again, and that night, she was fine without it.

I’m pretty shocked by how easy the process was and pretty happy that Samuel unwittingly forced my hand.

But I’m pretty sad about nap time and pretty sad that my baby is growing up.

Oh, and if you’re wondering what happened to the pacifier, I kept it. There’s no way I can bring myself to throw that thing away.