Sometimes I look at my kids sitting in the living room, playing Minecraft on the iPad, and I think back on how much has changed since I was a child. Wouldn’t it be fun to take our kids back to those days, just so they could see, first hand, how different things were? I don’t know if they’d even believe it. 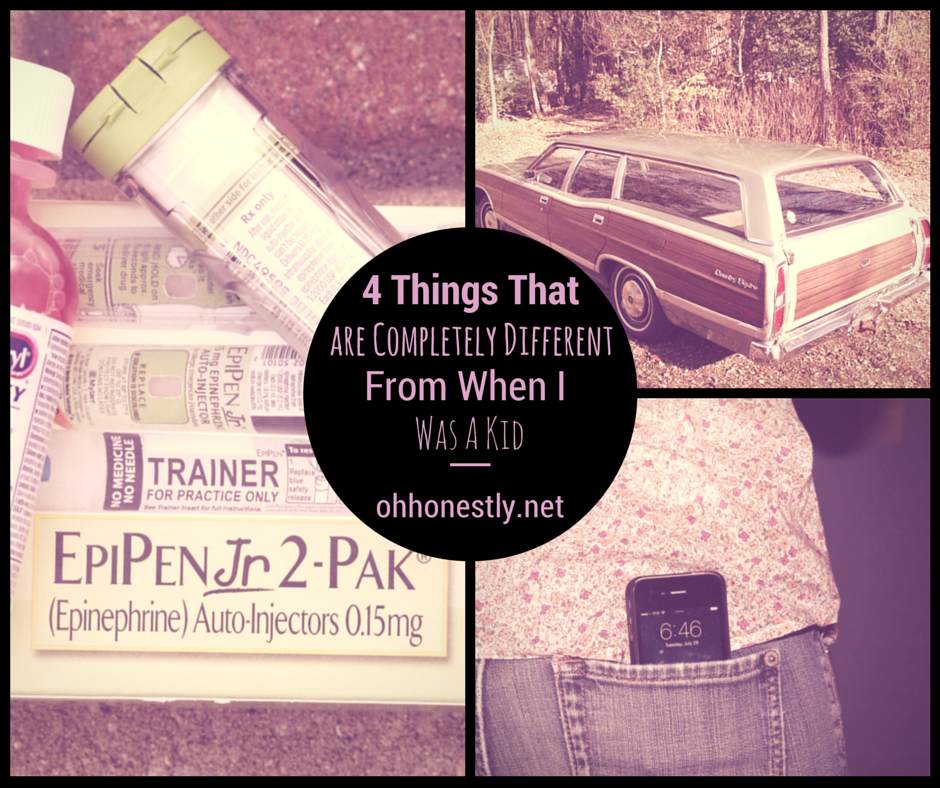 Each year, new recommendations and laws come out about car seat safety.

When my kids were infants, the prevailing wisdom was that they should stay rear-facing until they were a year old. Now they say two years and longer if possible. I’ve heard people say you should leave a kid rear-facing until he’s four. FOUR!

I rode rear-facing when I was a kid too. You know why? Because I sat in the back of our station wagon. 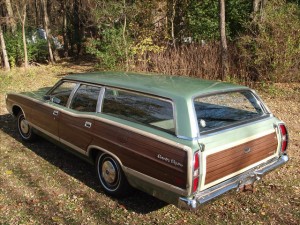 And when I got sick of sitting back there, I’d climb over the seat and hide on the floor behind the driver’s seat. Seat belts were optional and one time when my cousin wasn’t wearing one he accidentally opened the door and fell out of the car while it was moving. He got a little banged up, but he was okay.

At the rate things are going, when my kids have kids, everyone will be required to wear helmets while driving.

Do you remember learning about Stranger Danger at school? I do. And I remember going home and telling my parents we needed to come up with a code word in case they one day needed their friend whom I’d never met (and who probably drove a creepy van with no windows) to pick me up from school. If the ‘friend’ didn’t know the code word, then sorry, I wasn’t getting in that van, even if he offered me a lollipop.

Looking back, I was clearly more freaked out by this possibility than my parents were. So what’s the deal? Have I been raised in a culture of fear? I think so. The media finds every freak occurrence to report on and blows it up until everyone is terrified.

Take dry drowning, for instance. I read an article about it at the beginning of summer and now every time my kids choke on a little pool water, I’m watching them for hours afterwards to make sure it’s not happening to them. When I was a kid, that story never would have made it’s way to my parents. I’m not saying it doesn’t happen (and hey, I’m glad I know what signs to look for!); I’m just saying the chances of it happening are probably a lot less than the hype would have you believe.

The other big one this summer has been ticks. When I was little, I’d never heard of a tick; now I routinely pick them off my kids. The danger is real since many of those little suckers (pun intended) carry disease, but I also think there’s a lot of misinformation associated with them. Many cases of Lyme’s Disease, especially when caught early, are very treatable. Should we be vigilant? Of course. Should we hide in our houses until the deep freeze? Um, no.

When I think back to my childhood, I honestly can’t remember even one kid at school with a severe food allergy. I’m sure there were kids who had allergies, but there was no such thing as a nut-free classroom and if anyone asked me what an Epipen was, I wouldn’t have a clue.

Now both of my sons are in nut-free classrooms; the older because his friend has a nut allergy and the younger because he’s the one with a nut allergy. While I’m thankful for the care that the school takes to protect my son, I’m sad that it has to be like this. It’s crazy how food allergies have exploded in the past few decades.

Okay, here’s the big one. I’ll try to stick to the highlights.

My family got our first computer when I was maybe 9 or 10 years old. All it’s components weighed more than me and it took a good hour for several people to get all the wires and cords attached in the right places. Once it was turned on, there was a blinking cursor where you could type one of two things. The first brought you to a screen where you’d do some kind of techie thing (I can’t even remember what). The second brought you to a word processing program. That’s it. That was the only thing we used the computer for;  to type papers for school.

Now I have a computer on my kitchen counter. And one sitting up on the hutch in case we need it. And an iPad for convenience. And all the conveniences of a computer in one tiny handheld device called a phone. 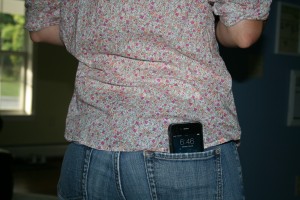 Dialing a phone used to take a full minute (more if there were a lot of eights and nines in the number). On the other hand, if you were calling someone local, you only had to dial four numbers.

We had four channels growing up, which meant there was a very limited amount of time to watch ‘kid shows’.

Now, not only do we have over 200 channels, but we also have entire channels devoted to children’s programming, the ability to record shows to watch them whenever we want, and OnDemand (because if we can’t find anything to watch on those 200+ channels and our recordings are a bore, we clearly need a back-up plan).

It makes me a little sad to know that my kids won’t know the simple joy of being sick on the couch, waiting eagerly for 11 o’clock to watch The Price is Right.

When I was a kid and had a question about something, I’d ask my parents. If they didn’t know, I’d go to the bookshelf in our den. I’d run my fingers along the dusty volumes of the World Book Encyclopedia until I found the one I was looking for. I’d slide it from it’s slot, flip through the pages, and get frustrated when I discovered that the answer wasn’t there.

Now, when my kids have a question that I don’t know the answer to, my response is always the same. “Let’s Google it!” We can find an answer to any question at the push of a button. Are some of the answers wrong? Oh, I’m sure, but hey, when all else fails, we can watch stupid videos of cats.

[Tweet “Think things have changed since we were kids? I don’t know; let’s Google it! @Oh_Honestly_LC”]

Many more changes have occurred since we were children. What would you add?