I was the pregnant woman all the other pregnant women love to hate. Not a stitch of morning sickness, perfect weight gain, a little basketball belly. I wondered at every flutter and kick and eagerly awaited each doctor’s appointment. Textbooks could have used me as their poster child. 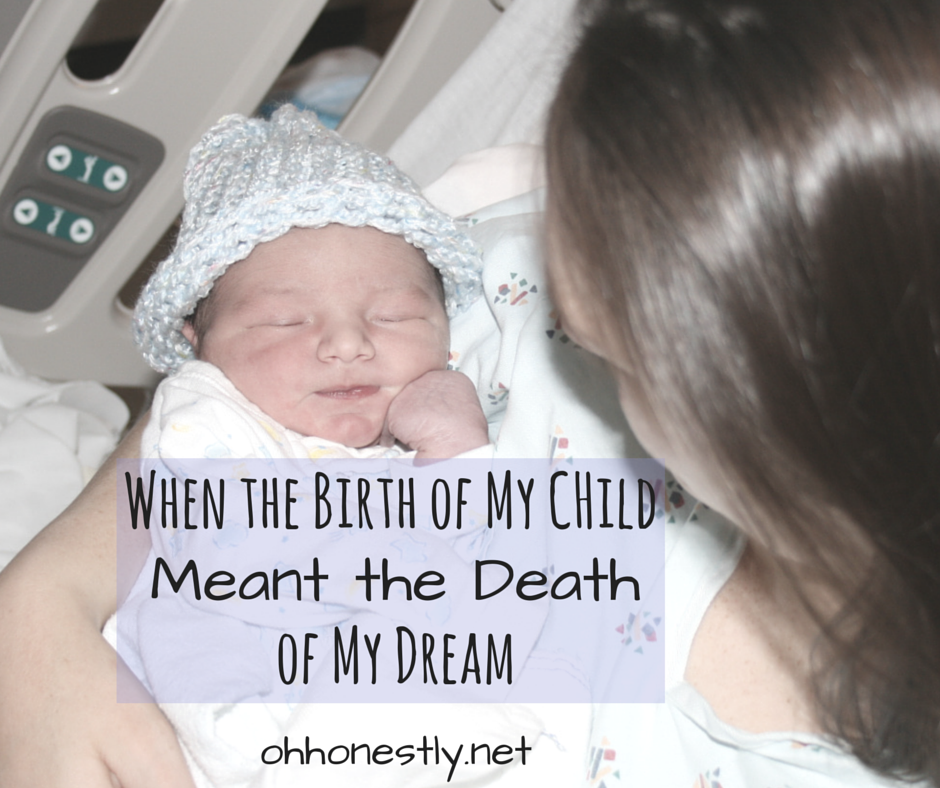 I read the books and took the classes and was prepared for birth as much as any first time parent can be. Given my fairly laid back personality, my birth plan was simple: Have a baby. I didn’t have strong feelings about whether or not to do it naturally or with the aid of an epidural, so I went into labor with the notion that I would play it by ear.

I did, however, have a dream of how my pregnancy would end. Whether numbed or feeling every pain, I would give one strong, final push to release my baby into the world. I would hear his sweet cry and they would lay him on my chest, face to face for the very first time. This was the way I’d always imagined it, since before I even knew I was expecting. Something about that moment was magical. It was the moment that always made me cry while watching A Baby Story. It was the moment, more than any other, that I knew I would remember for eternity.

When labor began exactly the way it should, I assumed my textbook run would continue. So when I found myself being wheeled towards the OR 12 hours later, my baby’s heart rate plummeting with each contraction, and medical personnel rushing to prepare me for an emergency c-section, I was shell shocked. As we hurried down the hall, doctor walking beside me, I half asked, half begged him, “Can I have a VBAC (vaginal birth after cesarean) for my next baby?”

In hindsight, it seems silly, asking about the next baby before I’d even birthed the first, but that dream was so strong and disappeared so suddenly, I had to grasp at whatever I could to keep it alive.

Before I knew it, my son was born, healthy and whole. I fell deeply in love the moment I heard his cry. I was immensely grateful for the team who not only detected that my baby was in distress, but who also had the expertise to deliver him safely.

But I also felt cheated.

My plan, my dream, had not materialized. That magical moment I’d been waiting so long for had been lost. And so, although I didn’t realize it at the time, I began the mourning process. Two more c-sections occurred before I finally came to terms with the fact that I would never deliver a baby the way I’d always dreamed.

Some may think I’m ridiculous. Perhaps they’re right. I have three healthy children after all. Mourning the fact that I didn’t deliver vaginally seems trite compared to those who have lost a child in birth or who can’t conceive at all.

Others may think I have a problem with cesarean deliveries, something akin to the craziness being spread a few weeks ago that women who give birth via c-section aren’t real mothers at all. Honestly, until I saw that foolishness spreading on Facebook, I didn’t know such people even existed. If you are a woman with a child, you are a mother, regardless of how that child came into the world.

To that woman I say: It’s okay. Let yourself feel those things. Let yourself mourn. And then, let your experience shape you into the woman you want to be.

The birth of my child was the death of my dream, but it also taught me one of my greatest lessons; one that I’ve learned over and over again since then. Motherhood is a fragile balancing act between having a plan and being prepared to throw that plan out the window when life intervenes.

I may not have gotten the birth of my dreams, but I did get the life of my dreams; one filled with excitement, joy, and more love than I ever imagined possible.